Low for the North, ridge for the South on Friday 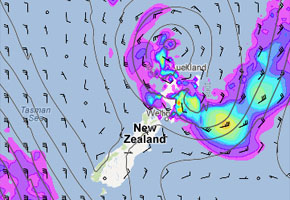 ”I like the new simplified forecast”, well that’s how one of our facebook readers put it once when I had a title in the past similar to the above. I thought that was quite funny but it does describe our weather for tomorrow albeit in a much more shortened form.

Rain across the upper North Island will ease to a few showers in the afternoon, winds will be breezy from the southeast. Areas of heavy rain may affect East Cape and Hawkes Bay for a time from tomorrow morning then easing there in the evening. For regions south of the Waikato in the west expect cloudy areas tomorrow, it will be mainly dry with the risk of a shower at times and a breezy southeasterly wind. Wellington will be mostly cloudy with the odd shower tomorrow, dry spells too however.

The South Island will still have the ridge in control with light winds, northeasterly winds may be a little breezy in the east. Generally sunny weather expected however there will be some cloud at times for the upper two thirds of the Island, Nelson and Marlborough will likely be cloudy for much of the day with the odd shower possible with easterly quarter winds. Late in the day cloud will increase about Fiordland.

Saturday things will start to get interesting in terms of the weather systems to the southwest of the country, the weather itself over the country may be settled for most with westerlies in the South Island and the decaying low in the North Island. Later on Sunday our first front moves in with a trough following in behind for Monday.

These types of lows always ruin the weather in Auckland quite long term.