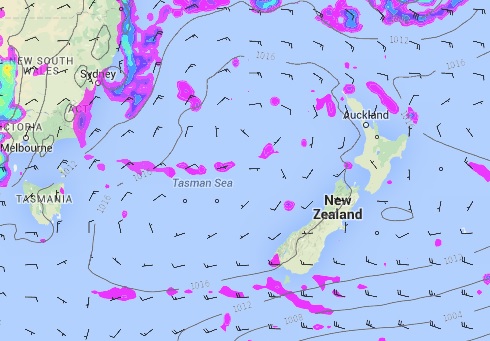 A few weak areas of low pressure will surround and move across the country, while the high pressure zones which have settled our weather this week still stay in place off the east and west coasts.

Skies will be mostly cloudy in the east of the island with easterly breezes, while drizzle patches will affect places for much of the day.
Dry parts of the east will welcome some cooler temperatures at least, though while any drizzle totals may not do too much for dry conditions, at least itâ€™ll hold things off for a few days from getting drier.

Marlborough may see a more sustained shower or two in the late afternoon and into the evening, though these will be fairly isolated and sparse.
Nelson is mostly sunny after some morning cloud clears away, and the winds should tend northerly in the afternoon.

The West Coast can look forward to a fine day, with westerlies and some high cloud, while Southland will see its fair share of cloud also, with some drizzle about the place.

Elsewhere in the North Island the weather is settled, with morning cloud breaking to sunny spells and just a few non threatening clouds for the afternoon, while breezes will stay light.

Conditions are looking cool for the east of the South Island, with highs in the mid to late teens.
The West Coast is looking warmer, with late teen temperatures even getting into the low to mid 20s about Buller – and also Nelson – especially inland.

For the North Island all areas will stay in the mid 20s mostly, though some inland areas will get into the high 20 range.