Low and cold change the main features this week 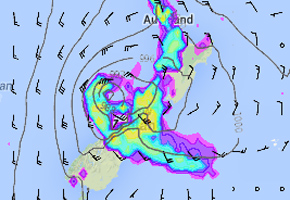 This week will be dominated by a low pressure system that forms out in the Tasman Sea today, moves onto central New Zealand tomorrow then off to the east on Wednesday. This will likely bring rain or showers to most places for a time and even some snow about higher altitudes in Canterbury and Marlborough. As the low clears away on Wednesday a ridge then moves onto the country so this will be a time for orchardists to take note of the potential rost risk.

Starting today, a southwest change moves through the lower South Island this morning bringing a period of showers, however they will ease back by midday. Expect high cloud about the upper South Island, southerlies develop about Canterbury in the afternoon with some rain developing first about the foothills then spreading to the coast. Rain will hang around on the West Coast for much of the day (especially North Westland) but will ease at night.

As the low in the Tasman tightens up and moves towards central New Zealand tomorrow we will be in for more interesting weather. Expect rain for Canterbury and about the top of the South Island, winds will be from the east or southeast. A front moves onto the western North Island early afternoon delivering a period of rain for most then easing to the odd shower. Eastern parts of the North Island will likely see high cloud and a brief period of rain in the evening as the front passes over from the west.

Expect some snow in the hills and ranges of Canterbury to 800m in the morning then lowering to 500m at night. Some snow will fall in Marlborough also but only reaching the 700m mark around midnight Tuesday. Snow when it does fall to these various levels it will be fairly reasonable, so a check of the official advisories and warnings out from Metservice would be recommended if considering any activities above these altitudes. Southern parts of the South Island see cloudy spells and the odd shower, mainly about Southland. Winds will be from the south in general.

On Wednesday conditions ease over the South Island with showers gradually clearing for most during the day, some snow may reach to 400m for a brief time in Canterbury however by this stage any flurries will only be minor. The same goes for Marlborough with snow flurries reaching 600m. Watch for frosts overnight about many South Island areas and perhaps some Central North Island regions as a ridge moves over. During the day the North Island sees showers and cooler weather clearing in the evening, winds from the southwest gradually tending more south to southeast later in the day.

The weather becomes mostly sunny over the North Island on Thursday, some cloud may still be clearing about the east coast. Winds tend southerly or southeasterly. Over the South Island high cloud builds ahead of a front in the Tasman Sea and rain develops on the West Coast.

The end of the week sees this front move onto the South Island with rain in the west, high cloud out east although there may be some brief rain later in the day for most. The North Island gradually sees northwesterly winds increasing with some cloud developing in the west, it should be a great evening for a BBQ on the east coast about the Hawkes Bay. 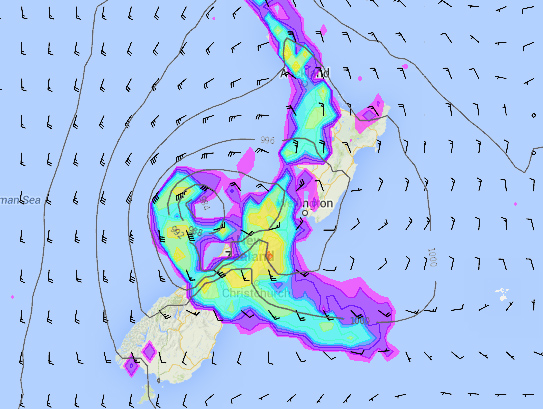 is there any snow expected for Twizel?

There isn’t alot of precipitation falling about the Twizel area, the township should be free of snow but could see a few flurries overnight Tuesday / early Wednesday before things clear.

Is there likely to be a significant amount of snow above 500m in Canterbury (ie over 10cm?)? Thanks for your help

These amounts are a guide.