Looking back: Windstorm of ’75 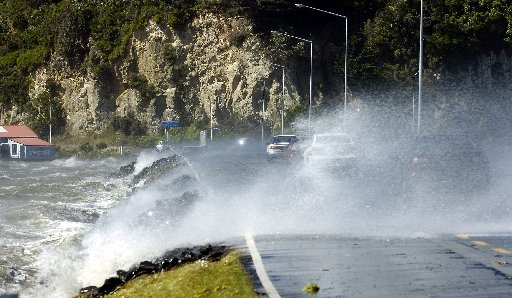 Severe gales lashed eastern areas of the country from Wairarapa to Southland in August 1975 and considerable damaged resulted as winds blew in excess of 150kph.

John Fletcher was working in Lincoln near Christchurch that morning and here is his personal account of that howling nor’ west storm….

I had to travel to work at Lincoln from Christchurch around 8 a.m. Fortuitously I was in a four-wheel drive truck which enabled me to drive over and around the fallen trees, cables and debris. There were no other vehicles on the road at that time, as far as I could see. Out along Riccarton Road and Springs Road roofs were off buildings, fences were blown over, large and small trees were damaged. Whole structures were down, particularly iron-clad industrial buildings. Roofing iron was skittering along the road and wrapping around power poles. Most fascinating were the two or three recently erected power pylons outside Lincoln which were crumpled and twisted.

Arriving at Lincoln I found the power off and inside his darkened office was my boss hunched over the radio trying to keep up with what was about to happen next. The damage to our buildings was considerable. Most of the glass from our two large glasshouses was strewn all over the place. Glass was still falling, so it was quite unsafe to be near the building. Smaller garden type glasshouses were blown over, windows were broken in offices, cables were down and there were branches and leaves everywhere.

The clean-up took weeks. The glasshouse reconstruction was a painstaking salvage, with the glass all needing to be washed by hand. This damage destroyed much experimental work and some valuable research collections. For some staff outside Southbridge power was not connected for days and telephones went unconnected for weeks. Many people lost roofs, windows, and the contents of freezers, while their gardens were shredded.

Winds peaked  at 172kph at Christchurch Airport (averaging 126kph) on the 1st of August and Timaru saw extreme gales hammer the city and top 165kph and average a very hefty 130kph.

Pic courtesy of ODT- cars on Portobello Road in Dunedin driving on the opposite side to avoid windswept waves.

I remember this day as well. What amazed me was how many trees were blown over. Entire plantations from ashburton to CH CH were flattened. The next door neighbors concrete block shed was flattened and the wind sounded like thunder. Scary for a nine year old.

Yes.
The “Big Blow” as it was called.
I can remember driving a train up from Timaru on that morning and the wind was that strong that it hindered the speed of the train even though I had the DJ loco in full power with a not a full load. I can remember around Ealing seeing a wheat silo moving across a paddock glistening in the moon-light.
We only got as far as Hinds as the railway and the road was closed because of trees and powerlines across the road/tracks.

According to the climate monthly summary for that month, gusts reached 105 knots (195kph) on the Kaikoura peninsula. For many years afterwards felled trees could be seen near the edges of SH1 between Ch’ch and points south.

I still remember it vividly as an 11 year old. We lived in Lowcliffe (near Ashburton) at the time. We watched corrugated iron get wrapped around power poles, our water tank blown over, chook-shed decimated, our fibrolite garage blasted outward all over the paddock. Even the old house lifting from its piles, and it felt as if the walls were breathing! We feared to go outside because of the flying sheets of iron.
We had no power or phone for a week and because we had a wet-back fire, our job as kids was to go down the road to a flattened pine forest and collect pine-cones for firewood, and I remember seeing sheep and cows killed that had sheltered under the trees that fell.

Mid-Canterbury saw flying sheets of roofing iron and tree branches hitting houses and empty steel grain silos blown several kilometres across country. They smashed through rows of trees and ‘bouncing’ dozens of metres as they went. It was possible to look down the track of their travel as there were straight lines across the landscape.

Many freshly sown crop paddocks ‘blew’ and flying soil filled the sky and entering houses, with up to a centimetre deep of dirt on carpets and furniture. Outside soil piled up in the lee of fences and buildings. It was possible to walk up the heaped soil and stand upto a metre high almost at the level of the top of the gorse hedges.

Complete rows of mature pine trees where blown down (and now irrigation has finished off the survivors!). Power was out for weeks so we’ll see how well the ‘centre-pivots’ cope next time there’s a real ‘nor-west’ blow!.