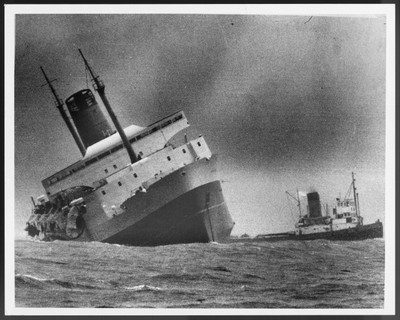 Today we delve into the archives and take a look at one of the stormiest months on record in this country.

April 1968: The weather for April was dominated by a tropical storm which originated near New Caledonia. It crossed the North Island on the night of 9th-10th and moved down the Canterbury coast on the 11th. Violent gales caused damage over the greater part of the North Island and the northern half of the South Island.

The greatest destruction from wind was in and around Wellington, where southerly winds averaged as much as 128 kph on the morning of the 10th, with gusts to 200 kph; while on exposed hilltops gusts were recorded to over 240 kph. Thousands of trees were uprooted, and roofs were blown off houses. During the storm the inter-island ferry Wahine ran aground at the mouth of Wellington Harbour. Flooding occurred in many areas, notably around Christchurch and Banks Peninsula on the 12th and in Southland and West Otago on the 15th.

Rainfall: Rainfall was above average or close to average over almost the whole country. It was more than double the average on the east coast of the South Island and up to about 80 kilometres inland from Balclutha to Blenheim; north of a line from Hamilton to Tauranga; and also over the greater part of the area south of a line from Stratford to Waipukurau. Around Lyttelton and Banks Peninsula some stations recorded 5-8 times the average value.
The Southern Lakes district received less than half the average rainfall, and it was also appreciably drier than usual in Fiordland and over the greater part of the Alps.

Sunshine: Sunshine was below average over most of the country. Greatest deficiencies of up to 50 hours were recorded in Canterbury and Nelson, also in parts of the central North Island. Nelson, Hanmer, Christchurch and Lake Tekapo all had their lowest April sunshine since 1938.

(Cyclone was Giselle). More on the history of storms around Cook Strait can be found in Ereck Brenstrum’s article on the Met Service site:

Cyclone Gazille was 960hpa off Wellington,at that stage it had fronts and was extratropical but deep concentric isobars.