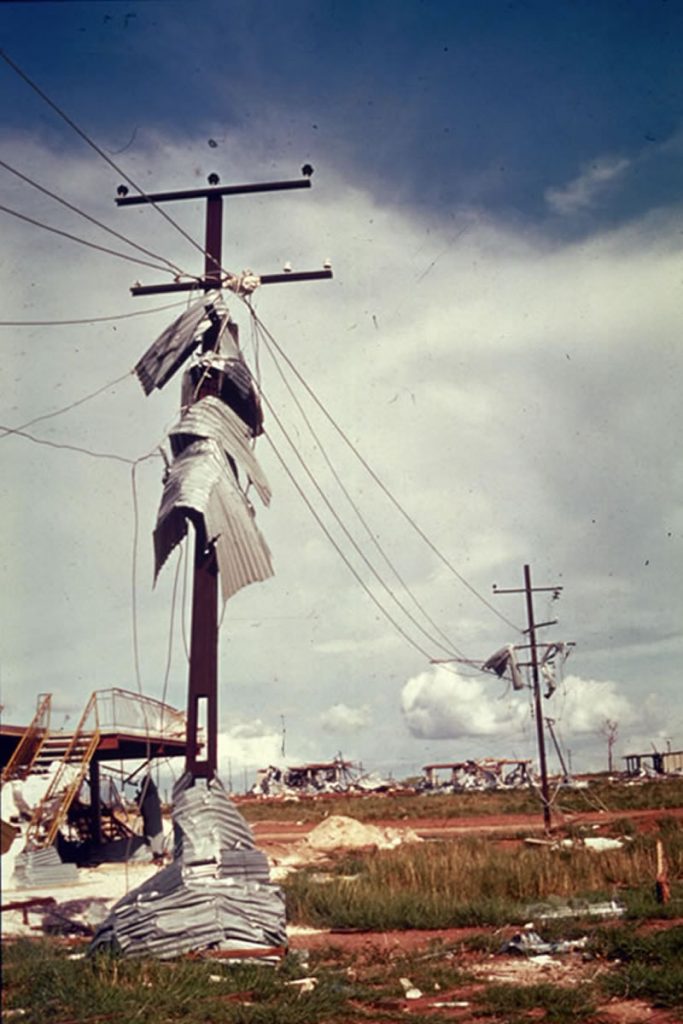 Tropical Cyclone Tracy struck Darwin in the early hours of 25/12/1974 (Christmas Day). Rated a Category 4 cyclone (wind gauges registered 217 km/h before they failed), Tracy caused massive building and infrastructure damage (including all power, water, sanitation & communications) as well as huge commercial/industrial losses. Of the (more than) 650 injuries treated, 112 people were admitted to hospital. Over 80% of all buildings were destroyed or seriously damaged. There were virtually none left undamaged in some way. Only 400 out of 11,200 homes remained intact (5000 destroyed and the balance damaged, the majority, very seriously).

Darwin Airport anemometer recorded 217 km/h before failing, thus denying an exact reading of Tracy’s wind strength but they were estimated to have reached 250 km/h. Destructive winds battered the city for about six hours from 1am on Christmas morning. Fortunately, a 4 metre storm surge did not cause additional flood damage as the tide was low at the critical time, and the sea wall in Darwin Harbour is high.

The cyclone caused the largest-ever evacuation and reconstruction operations in peacetime Australia. A total of 35,362 people (of the approx 47,000 population) were evacuated, 25,628 by air (15,950 in civilian aircraft & 9,678 in military aircraft) and the remaining 9,734 by road, to southern cities for many months.

On 17 March 2005, the Northern Territory Coroner ruled that six people listed as missing during Cyclone Tracy have now been officially declared deceased (perished at sea), following an Inquest into the final two shipwrecks resulting from Cyclone Tracy.   The Inquest outcome increased the official death toll due to Cyclone Tracy from 65 to 71.