Looking at the Capital 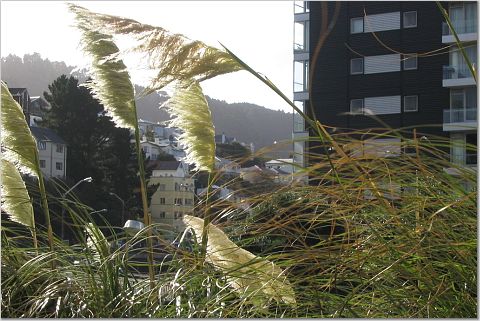 Yesterday we had a look at the overall climate of Southland from a marketing point of view and today we catch up on our Capital city and what it has to offer according to gw.govt.nz.

The Wellington region has a temperate climate, with moderate rainfall, relatively mild daytime temperatures, and infrequent frosts. Annual rainfall ranges from 800 mm in the eastern Wairarapa, to 7000 mm in the high parts of the Tararua Range.

Windy Wellington
Wellington is renowned for its wind. The wind-funnelling effect of Cook Strait leads to a high frequency of strong winds around the southern coast, while the rugged topography results in local variations in wind direction and strength.

Wind records from Cape Palliser and Castlepoint show that the Wairarapa coast is among the windiest spots in New Zealand.

Maximum wind speeds can be very high during extreme weather events: winds of up to 200 km/h were recorded at Kelburn during the Wahine storm on 10 April 1968, and a peak gust of 215 km/h was recorded at Hau Nui in the Wairarapa on 19 October 1998.

Wellington would be considerably windier than Chicago. See http://www.usatoday.com/weather/resources/askjack/archive-windy-city.htm for some US city wind speeds – Chicago isn’t that high. They give it an average of 10.3mph (16km/h), and another site claimed a record gust of 88mph (about 140km/h). Both that average and extreme are well below Wellington’s.

There’s a marked decrease away from the Michigan lakefront. I lived there for a year – it was nowhere as windy as Wellington, or various other NZ towns for that matter.

I’ll add the fact that the average sunshine for W’gton over the last 30 years is 2113 hours – although it was 100 less than that last year, the running mean has increased markedly since the early 1980s. That is higher than the average for significant NZ population centres.

The Chicago thing is legend – while there is a well-known “lake effect”, Chicagoans would refer to a 40mph (65kph) wind gust as quite severe. The “windy city” title came from the antics of politicians.

N-NW winds tend to be windy also S-SE winds similar in Wellington,however if a NE-SW regime rules Auckland is the windy city and Wellington is calm.Wellington does get quite a high run of sunshine inspite of wind,Wellington region has many microclimates,Wellington city can be the opposite conditions than over the nauranga gorge and hill.The Hutt has similar conditions to Wellington city though tends to be a little warmer temperature wise.A fairly general view which doesnt take in variable rain events.

The Hutt is considerably colder at night, so overall it’s cooler except in isolated spots near the harbour, which are matched by some similar ones in Wellington city. Cloudiness also increases as one goes up the valley, with more major hills nearby and less westerly sheltering from the northern SI mountain bloc.