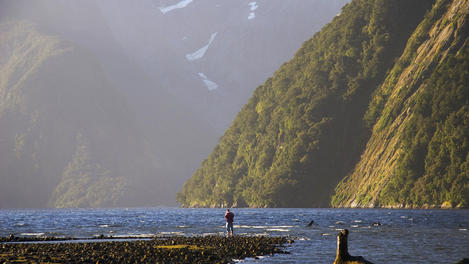 Lonely Planet is one of the biggest tourist online companies and below they’ve done their best to promote our weather in a nutshell. Does it all make sense to you and do you agree?

NZ sits smack-bang in the Roaring Forties, which means it gets ‘freshened’ (some say blasted) by cool, damp winds blowing in from the Tasman Sea and is consistently slapped by the winds howling through Cook Strait.

On the South Island, the Southern Alps act as a barrier for these moisture-laden easterlies, creating a wet climate on the western side of the mountains (around 7500mm of rain annually!), and a dry climate on the eastern side (about 330mm). After dumping their moisture, the winds continue east, gathering heat and speed as they blow downhill and cross the Canterbury Plains; in summer this katabatic or föhn wind can be hot and fierce.

On the North Island, the western sides of the high volcanoes attract a lot more rain than eastern slopes, but the rain shadow isn’t as pronounced as in the south – the barrier here isn’t as formidable as the Alps. North Island rainfall averages around 1300mm annually.

When to go
The warmer high-season months (November to April) are ripe for outdoor exploration. Summer (December to February) is also when Kiwis crank up the food and wine festivals, concerts and sports events. December in the far north can be rainy, however. If you’re a snow bunny, visit when the powder is thickest – June to August is skiing high season. Remember, though, that in winter, warm-weather beach towns might be half asleep.

If you want a real holiday, staying and eating in your venues of choice, avoid school holidays (particularly mid-December to early February) and public holidays. Most places are packed to the gills with campervans, tourists, highly strung parents and inexhaustible children in the post-Christmas weeks. The cooler, less touristed ‘shoulder’ periods (October/November and April/May) are a much better idea.

NZ is smack-bang in the middle of the Roaring Forties – prevailing west-to-east winds buffet the country year-round, ranging from gentle breezes to tempestuous gales. On both islands it’s drier in the east than in the west, where mountain ranges snare moisture-laden winds from the Tasman Sea. It’s usually a few degrees cooler on the South Island than the North Island. Wherever you are, remember that NZ has a maritime climate – the weather changes rapidly. Anyone tramping at any time of year needs to be well prepared for all weather conditions. The NZ Mountain Safety Council has the information you need – available from DOC visitor centres nationwide.

Too simplistic, as one would expect. No description of cloudiness variation over the country, and the rainfall contrasts are exaggerated across the Alps (nobody lives in the 7000-12000 mm zones, and the 330 total applies to only a very small area. Wellington and Cook Strait’s winds do not “consistently howl”. They don’t mention the drier parts of the North Island – which include a small part of the west! – or the relatively lower sunshine in the southernmost areas despite rainfalls there not being high.

They would provide better information by simply quoting verbatim from the NZ climate summary on the NIWA website (for example).

Moisture-laden easterlies? I presume that’s mean to be westerlies. But they fail to mention the cool that easterly affects the east coast of the SI so much!