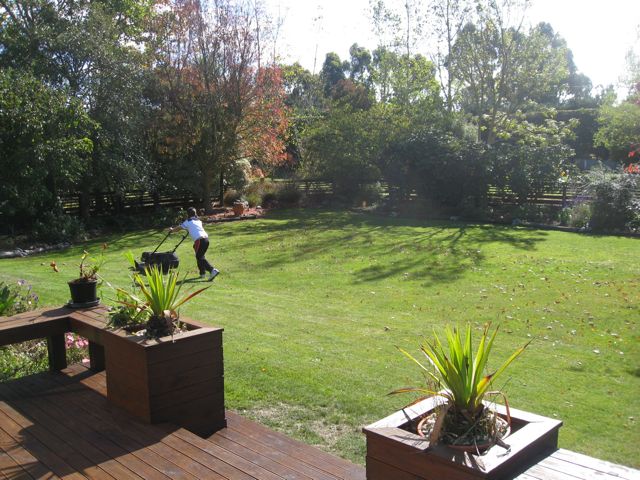 Even though parts of the country had a relatively coolish summer it seems that the lawns have failed to notice and have enjoyed the lack of sunshine.

Grass growth here in Canterbury got underway rapidly after a couple of snowy events last winter and it seems that spring growth has remained ever since.

This time last year there was quite a bit of burn off which there usually is in this part of the world during the hotter months but 2012 it seems to have proved the exception.

Generally each year I’ve been mowing the lawns every 10-14 days as the section turns from a green tinge to a rustic look but this year the green has remained, the growth has been constant and I’m mowing every 5-6 days.It might be good on the fitness levels but sometimes enough is enough!.

Last week cooler temperatures arrived in the region with a hint of a ground frost on a couple of occasions. This may have slightly lowered the soil temperatures and the growth was cut back a bit but this weekend it’s warmed up a little at night and it seems the constant growth has returned.

In Christchurch the city council reduced the water restrictions to level 2 this weekend which has been good news for residents and as a result also of a mainly cool summer.
It was introduced at level 3 last October following earthquake damage to the city’s pipelines and reservoirs.

What has the grass growth been like in your part of the country and any different at all from previous years? Has it changed colour over the last few months and been almost bare or have you possibly been watering yourself with a bit of a hand with nature itself.

I think I might have to invest long term in a ride on mower as the old legs are struggling to keep up with the pace or perhaps give someone else a go.

Image of Richard’s son Michael put to the test!

Mow grow mow grow mow grow – thats how it is here in Army Bay. The blimin things never stop growing – my husband for some wierd reason has lack of delight in repeatedly having to clip them. I look on the positive side – hey well at least you have a mower. Imagine if it packed up and you had to use scissors! Hahaha

It’s been unbelievable but thank goodness they are slowing down now. Didn’t have to mow them this weekend which is the first time in quite a few months.