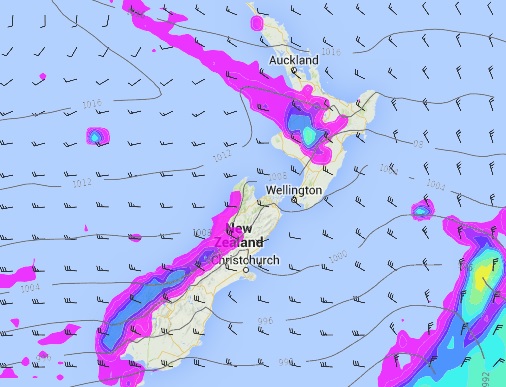 This coming week looks fairly typical of spring, there wonâ€™t be as much unstable air in the mix as previous weeks so a sign summer is getting closer.

For the North Island on Monday expect a light westerly airflow, periods of cloud and the odd light shower in the west. About the Bay Of Plenty, along the east coast and about Wellington conditions are mostly sunny with light winds. Mostly sunny about the South Island with light winds and afternoon sea breezes, some cloud could produce a shower or two about Southland / Otago in the afternoon.

Morning showers for most North Island areas clears by midday on Wednesday as northwesterly winds change southwest, sunny spells break through in the afternoon. Morning high cloud for the east coast then afternoon sunshine with westerlies. Showers for the South Islandâ€™s West Coast with brisk westerlies, mainly dry out east with west to northwest winds. Southland and Otago see the odd shower at times with brisk westerlies.

A westerly airflow lies over the country on Thursday, mainly dry and sunny out east with cloudy periods and showers in the west. Rain for the West Coast of the South Island.

Finally on Friday a front works its way north over the country, rain then showers for most western regions as the front moves north. Sunny with high cloud out east then a southerly change moves up the South Islands east coast from afternoon bringing a few showers.