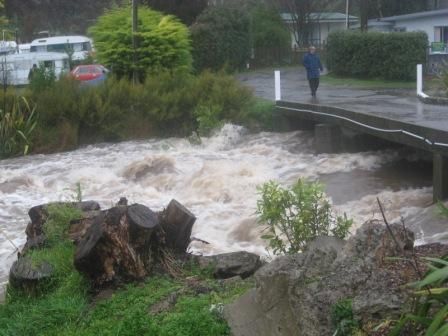 A large low, which by noon Friday will have 3 centres, is slowly moving towards New Zealand from the Tasman Sea bringing with it heavy rain and thunderstorms for western and northern parts of the country.

The low is so large it has spawned several fronts and while not especially aggressive its large size does mean most places will be affected.  So, who will get what?

We often say that large lows are harder to forecast…that’s because fronts come and go and the lows are so large that they travel incredibly slowly…so it’s hard to pinpoint the exact timing of fronts – even within a 24 hour period.

The latest computer models now show a messier forecast for Friday – showing fronts stalling and breaking up while new ones form. Timing is everthing if we want to produce an accurate forecast.

Earlier this morning we predicted a band of heavy rain will set in across western regions overnight tonight and into Friday morning.  The front, an occluded one (when a cold front catches up with a warm front) will gradually spread eastwards across the nation during Friday, clearing the country on Saturday.

As of 8am it now appears maybe Nelson, Taranaki and Northland may receive heavier rain tonight…but that it wont push too far east.   According to MetService weather maps the front may even stall to the west of the North Island tonight then reorganise itself for another shot tomorrow afternoon.

Places most exposed to sustained heavy rain will be regions facing north with hills or mountains to the south, west and east – such as Bay of Plenty and Nelson, the layout of the terrain in these regions basically holds the rainclouds for longer.

As of Wednesday evening MetService had high confidence of heavy rain for Bay of Plenty between Friday and Saturday with moderate confidence for Coromandel Peninsula and the Nelson region.

Torrential rain has affected Coromandel Peninsula over the past few days and WeatherWatch.co.nz says more rain could signal potential flooding for this region however with so much uncertainty in the predicted fronts it’s still a matter of waiting for the next sweep of comuter models.

Heavy showers may also cause some problems in the Auckland region on Friday with surface flooding possible.  Most grassy areas are now saturated following a number of wet days and additional rain is unlikely to be easily absorbed.

The Weather Watch Centre says Northland may be another area to watch following recent rainy periods.  The Northland region has been exposed to several rain storms since February this year with torrential rain causing some flooding around Kaikohe just a few weeks ago.

Rain on Friday and heavy showers on Saturday could be a bit of dampener for the Hamilton Fieldays.

Meanwhile another cold southerly is on the way for the South Island starting late on Saturday and peaking early next week.  WeatherWatch.co.nz believes the southerly change will arrive in time for the All Blacks game in Dunedin on Saturday night – a strong southerly and a feels like temperature of around zero is currently in the forecast for kick off.

Due to the uncertainty of this system we’ll post a special update around 4pm this afternoon, following our next computer model update.  From this update we anticpitate having high confidence in our forecasts for tomorrow.