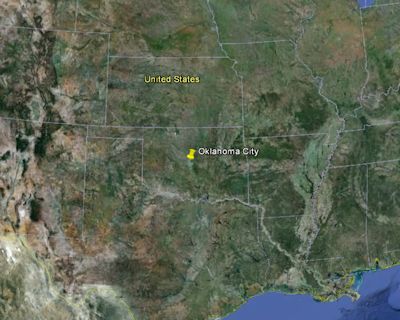 Tuesday night in the US, two super-cell thunderstorms collided over the metropolitan area of Oklahoma City, Oklahoma…the heart of what is commonly thought of as “Tornado Alley” in the United States.

The size of the hail produced was as rare as the event itself.  Hail as big as grapefruit was reported around the area, up to 10cm in diameter.  In some cases, hail completely covered the ground much like it did in Wellington Tuesday morning.

Super-cell thunderstorms are known for producing tornadoes.  But on this occasion, it was the hail that stole the show.  There was only one tornado report.  It was weak and touched down only briefly.  Another rarity for a weather even like this.  Another unusual occurance related to this type of severe weather; no injuries or fatalities were reported.

This video shows what large hail does when it falls into a swimming pool.

bet you anything they were stoned