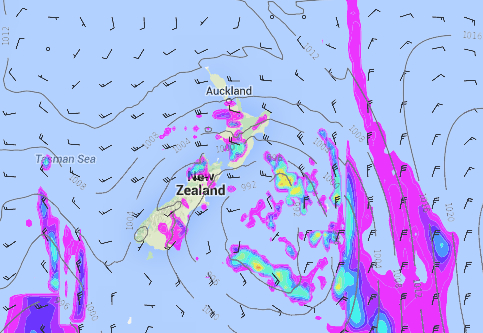 The West Coast of the South Island sees heavy falls and possible thunderstorms in the morning, easing to showers by midday.
Showers may continue to be heavy at times through the afternoon, with the odd rumble here and there.

Easterlies blow about the lower South Island and in the east of Otago, bringing areas of rainfall which become more widespread as the day goes on.
Those winds then turn southerly by evening.

Canterbury and Marlborough have thickening high cloud, with a few spots of rain moving through in the late morning or around midday, though these then clear, with sunny areas moving in.
Later in the evening or overnight, southwesterlies move into Canterbury, bringing showers.
Marlborough unfortunately may remain fairly dry with this one.

For the North Island, cloudy skies and increasing northerlies will be the order of the day, with showers moving into the west in the afternoon as northerlies tend more northwest.

High cloud thickens out east with a spell of showers in the late afternoon and into the evening spreading over from the west, before clearing.
Rain then eases to showers for most western regions by evening, perhaps becoming mainly dry for Auckland and more so in Northland and the Bay Of Plenty.