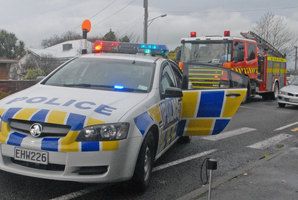 A landslip has hit a house in Picton today.

Emergency services are at the scene on Milton Terrace, a Marlborough District Council spokeswoman said.

The landslide happened about 4pm.

Southern fire communications shift manager Karl Patterson said the slip had broken through a bedroom wall and was still moving.

There had been no reports of any injuries to the occupants, he said.

The residents have left the home, but it was not known if other properties were being evacuated.

The Marlborough District Council was arranging for a contractor to come to clear the slip, Mr Patterson said.

“We’ll make sure the residents are safe, once that’s occurred, we’ll head home.”

The Marlborough District Council said heavy rain in Picton is causing overflows at several points in the town’s sewerage system.

Members of the public are reminded to follow safe hygiene practices if they come into contact with dirty water.