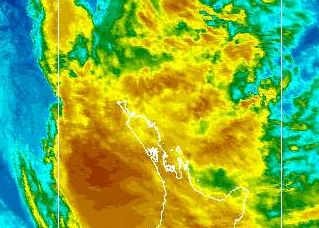 If you’re unhappy with the current weather then we have bad news for you – the forecast for the next 10 days looks fairly similar.

The weather patterns have locked into a new position for at least the next week and a half predicts WeatherWatch.co.nz which will see plenty of easterlies, clouds and rain over the North Island but fairly dry, sunny, weather over the South island.

The set up over the next 10 days also puts Taranaki and other central western areas of the country in the squash zone between low and high pressure – in other words, where the isobars will bunch up bringing strong winds at times from the easterly quarter.

WeatherWatch.co.nz says after today’s downpour another weaker low could bring in further wind, rain, showers and cloud for the rest of the week, while another more aggressive sub-tropical low is expected this coming weekend/early next.

The South Island should be mainly dry under a ridge of high pressure this week but heavy rain in the west and strong northerly winds in the east are likely to arrive next week.

Despite a brief cold snap heading up the South Island over the past 24 hours WeatherWatch.co.nz believes most places across New Zealand will have temperatures above average, particularly at night, over the coming week or so.

NIWA says La Nina is now starting to weaken as we head into winter but it is still fairly active.

We have been sooooooooo lucky over this summer, its been one of best in a long time. So all things come to an end, and it is going into winter

This is the first time were locked into this pattern since December for an extended period,unfortunately not earlier in the year but now with all the decidious trees to the east blowing leaves everywhere,guess its called Murphys law.