Home > News > La Nina? That depends on which Governmen...

La Nina? That depends on which Government forecaster you ask 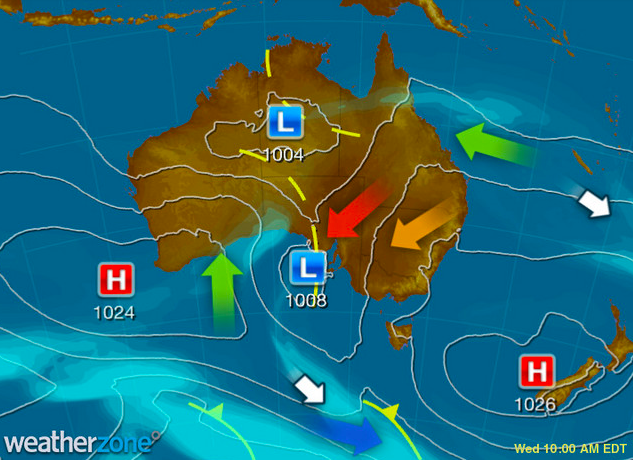 Whether or not a La Nina event is currently underway in the Pacific Ocean depends on which country you are in.

According to an update issued by Australia’s Bureau of Meteorology (BoM) on Tuesday, the Pacific Ocean is currently in a neutral phase and there is a 70 per cent chance of a La Nina event occurring during the months ahead.

This information contradicts an update released by America’s National Oceanic and Atmospheric Administration (NOAA) earlier this month, which stated that a La Nina event is already underway and it is likely to persist until at least early next year.

So with both the BoM and NOAA looking at the same Pacific Ocean, why don’t they agree on whether or not a La Nina is occurring?

The unhelpful disagreement occurs because Australia and America have different operational definitions of La Nina.

For a La Nina to be declared in Australia, any three of the following four thresholds need to be met:
– Sea surface temperatures in a defined region of the equatorial Pacific Ocean (called NINO3 and NINO3.4) need to be 0.8 degrees below average
– Trade winds in the western or central equatorial Pacific Ocean need to have been stronger than average for the previous three to four months
– The Southern Oscillation Index (SOI), which measures the atmospheric pressure difference between Tahiti and Darwin, needs to be at a value of seven or more when averaged over three months
– A majority of climate models surveyed by the BoM show sustained cooling in a defined area of the equatorial Pacific Ocean until the end of the year

America’s NOAA considers a La Nina event to occur when:
– The sea surface temperature anomaly in a defined area of the equatorial Pacific Ocean (called the NINO3.4 region) is 0.5 degrees Celsius or more below average and is forecast to persist at that level for at least three months
– Atmospheric features, such as trade winds and air pressure, display La Nina-like characteristics

So while Australia’s BoM and America’s NOAA monitor the same Pacific Ocean, different operational definitions of La Nina between the two countries cause these events to be officially declared at different times.

Unfortunately, these distinct definitions are ingrained in each country’s modus operandi and we are unlikely to see them merged into a consistent La Nina operational definition any time soon.

Please note WeatherWatch.co.nz agrees with the above story from Weatherzone, Australia. Here in New Zealand NIWA (our Government owned climate research organisation) has sadly now turned heavily commercial. WeatherWatch.co.nz reports on La Nina and El Nino independently and often trust public Australian forecasters at BoM (which is not commercial like NIWA has become). We also trust NOAA in the US and build our own conclusions for what their forecasts mean for New Zealand. For example, last summer NIWA said conditions in NZ would be especially hot, it turned out to be fairly average for the first two months with many complaining it was wet and cool. WeatherWatch.co.nz says “weak” La Nina and El Nino events can sometimes miss New Zealand completely, especially with our weather being so chaotic due to our location on earth (sticking into the Southern Ocean area!).  So we don’t always need to run news headlines about La Nina and El Nino events if they are especially weak or regionalised around the tropics/equator. Generally speaking WeatherWatch.co.nz likes to evaluate a number of non-commercial Government forecasters around the world when we comment on long term weather trends for NZ. Our new relationship with IBM means in the future WeatherWatch.co.nz will have access to the world’s most powerful and intelligent computer to crunch seasonal data specific to regions in New Zealand. We also hope in the future NIWA returns to engaging with the private weather sector instead of using their resources to attack us or send legal threats from tax funded lawyers when all we’re trying to do is share their tax funded information or data. This sadly goes against the rest of the first world especially when climate change issues are so topical. -WW

As far as I am concerned we are currently in a developing La Nina event. The way that the Anti-cyclones are scrolling across at our latitude is very typical for what La Nina brings to NZ as a whole. Palmerston North is currently sitting in the driest November on record with 15.6mm at the Turitea (near Massey Uni) site. The previous driest November here was 2012. That was at the start of a strong La Nada Drought (La Nada because we were coming down from a small El Nino at this time of the year). Those La Nada droughts have happened several times here in my 60 years in almost identical fashion. A dry November followed by a near normal December and then the tap is really turned off through Jan-Feb-Mar. End result, less than 250mm over a 5 month period.

This is heading for a La Nina drought, and although I am picking up repeating patterns, unlike the La Nada ones, these La Nina events aren’t anchored to the Nov-Mar period. This debate about when are we, or are we not in any particular phase of ENSO is very much like asking, “are we in drought yet?” The grass still looks green on top, but in all reality it is just a veneer. Droughts by nature are insidious affairs, unlike their seemingly opposites, floods. Some people take a bit of convincing that a drought is underway. Droughts are not usually officialised until they are often nearly over, apart from exceptionally prolonged ones.

Because La Nina events bring higher sunshine hours (last summer wouldn’t be hard to beat though) this also brings higher T-Max numbers. That combination of more sunshine and a higher T-Max quotient will make this spring/summer stick in our collective memories for all of the right reasons for a change!