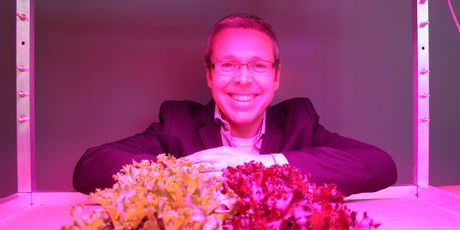 There’s a certain circularity in the story of horticultural lighting solutions start-up Biolumic.

The tale began when its founder and chief science officer, plant physiologist Jason Wargent, was prompted by the hole in the ozone layer to investigate the negative effects increased levels of ultraviolet light were having on plants. What he found, however, was that increased UV levels had many beneficial effects on the way plants grow.

Technology developed by Wargent – a researcher at Massey University and a world expert on the effect of UV light on plants – is the foundation for Biolumic’s Smart Light Array technology.

The technology can manipulate quantities of UV light at different wavelengths, accelerating or slowing certain growth characteristics in plants, according to “light recipes”.

One focus for the company, for example, is demonstrating the technology’s ability to increase root growth and mass in seedlings to help them better survive transplantation.

The technology also has the ability to enhance certain colour or flavour profiles in plants so the company is looking at targeting the pre-processed leafy greens industry as greens become an increasing component of diet.

Biolumic’s general manager, Warren Bebb, said the potential applications for the technology were huge – from increasing the compounds that can be derived from algae to boosting plants’ disease resistance and decreasing the need for chemical sprays. Dramatic weather variations caused by climate change were also making indoor growing more appealing and the technology could add the UV component to those systems, said Bebb.

In its first funding round it raised $350,000 from Manawatu Investment Group’s MIG Fund 1, the New Zealand Seed Co-Investment Fund, a Callaghan Innovation grant and a loan from the Central Energy Trust. More recently the company has secured a second round of angel investment from the early stage, Global from Day One seed fund.

Palmerston North-based accountant Mike Creed, an investor in MIG Fund 1 and a member of its investment committee, said the opportunity to invest in a local business based on innovative technology with large-scale global potential was compelling. “It’s a really exciting company and it’s exciting to be in at the ground floor to see what develops and, hopefully, be part of its success.”

The firm begins field trials in September, planting out its UV-treated seedlings alongside those of a local grower using traditional methods. It expects its first products to go to market towards the end of next year.

•Produced in association with the Angel Association New Zealand.

I’ve been doing this for 35 years along with many others in various lighting techniques in aquiarium keeping for Fish stocks, Corals, and aquarium plant life.
Various light types aca lighting frequencies for growth and life of all aquarium life.
Not new at all.