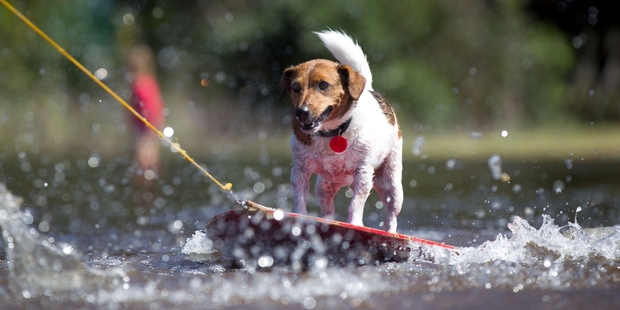 Motorists and beach-goers are again being urged to keep an eye on a king tide that has caused issues in recent days.

Forecasters have said the fine weather over most of the North Island had nothing to do with a king tide that has led to flooded roads around Auckland and strong currents in beaches towards Northland.

The worst appeared to be over, however.

King tides occur when there’s either a full moon or the moon is exceptionally close to the earth.

Although there have been warnings to be careful in and around Auckland beaches, motorways and roads, many people found ways of making the most of the king tide.

Among those enjoying the conditions yesterday was Barry Nottingham, who was out with dog Max at Little Shoal Bay Reserve in Northcote.

Max (above) looked more than happy to take a watery ride with his owner pulling him along on a boogie board.

Sunny skies and hot temperatures will once again feature in most parts of the North Island today, with a high of 24 degrees and light winds in Auckland.

Tomorrow will be the same in Auckland – with some cloudy periods – before Thursday, Waitangi Day, brings in what is expected to be the first in a string of rainy days.

Fine weather is also forecast further north, in Whangarei, and across much of the North Island – Tauranga, the Waikato region, New Plymouth, Napier and Palmerston North – with temperatures in the mid-20s.

Wellington will be windy today, with gusts of up to 70km/h.

It will be a mixed bag in the South Island, with fine weather forecast in Canterbury, Otago and Southland, but drizzle in Buller, Westland and Fiordland.