Kidstime – All types of wind 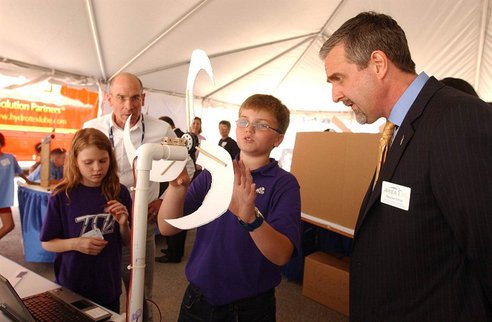 There are so many ways to describe wind and today we’ve got a few ways of breaking it all down as there are many different types.
In New Zealand the nor’ wester is a wind on the eastern side of the mountains which can warm up very quickly.
Southerlies can bring cloud and showers and sometimes snow to the south and east of the country.

So let’s begin with a simple question…

What is wind?
Wind is air in motion. It is produced by the uneven heating of the earth’s surface by the sun. Since the earth’s surface is made of various land and water formations, it absorbs the sun’s radiation unevenly. Two factors are necessary to specify wind: speed and direction.

What causes the wind to blow?
As the sun warms the Earth’s surface, the atmosphere warms too. Some parts of the Earth receive direct rays from the sun all year and are always warm. Other places receive indirect rays, so the climate is colder. Warm air, which weighs less than cold air, rises. Then cool air moves in and replaces the rising warm air. This movement of air is what makes the wind blow.

What is a windstorm?
A windstorm is just a storm with high winds or violent gusts but little or no rain.

What is a downburst?
A downburst is created by an area of significantly rain-cooled air that, after hitting ground level, spreads out in all directions producing strong winds. Unlike winds in a tornado, winds in a downburst are directed outwards from the point where it hits land or water. Dry downbursts are associated with thunderstorms with very little rain, while wet downbursts are created by thunderstorms with high amounts of rainfall.

What is the jet stream?
The jet stream is a fast flowing, river of air found in the atmosphere at around 12 km above the surface of the Earth just under the tropopause. They form at the boundaries of adjacent air masses with significant differences in temperature, such as of the polar region and the warmer air to the south. Because of the effect of the Earth’s rotation the streams flow west to east, propagating in a serpentine or wave-like manner at lower speeds than that of the actual wind within the flow.

What is a monsoon?
A monsoon is a seasonal wind, found especially in Asia that reverses direction between summer and winter and often brings heavy rains. In the summer, a high pressure area lies over the Indian Ocean while a low exists over the Asian continent. The air masses move from the high pressure over the ocean to the low over the continent, bringing moisture-laden air to south Asia. During winter, the process is reversed and a low sits over the Indian Ocean while a high lies over the Tibetan plateau so air flows down the Himalaya and south to the ocean. The migration of trade winds and westerlies also contributes to the monsoons. Smaller monsoons take place in equatorial Africa, northern Australia, and, to a lesser extent, in the southwestern United States.

What are the global wind patterns?
The equator receives the Sun’s direct rays. Here, air is heated and rises, leaving low pressure areas behind. Moving to about thirty degrees north and south of the equator, the warm air from the equator begins to cool and sink. Between thirty degrees latitude and the equator, most of the cooling sinking air moves back to the equator. The rest of the air flows toward the poles.

What are the doldrums?
The doldrums is an area of calm weather. The trade winds coming from the south and the north meet near the equator. These converging trade winds produce general upward winds as they are heated, so there are no steady surface winds.

What are the prevailing westerlies?
Between thirty and sixty degrees latitude, the winds that move toward the poles appear to curve to the east. Because winds are named from the direction in which they originate, these winds are called prevailing westerlies. Prevailing westerlies in the Northern Hemisphere are responsible for many of the weather movements across the United States and Canada. In the Southern hemiphere New Zealand and central and southern Australia are mostly affected.

What are the polar easterlies?
At about sixty degrees latitude in both hemispheres, the prevailing westerlies join with the polar easterlies to reduce upward motion. The polar easterlies form when the atmosphere over the poles cools. This cool air then sinks and spreads over the surface. As the air flows away from the poles, it is turned to the west by the Coriolis effect. Again, because these winds begin in the east, they are called easterlies.

What is a sea breeze?
On a warm summer day along the coast, this differential heating of land and sea leads to the development of local winds called sea breezes. As air above the land surface is heated by radiation from the Sun, it expands and begins to rise, being lighter than the surrounding air. To replace the rising air, cooler air is drawn in from above the surface of the sea. This is the sea breeze, and can offer a pleasant cooling influence on hot summer afternoons.