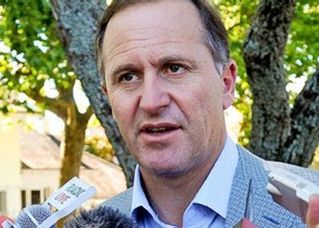 He claimed a victory over the Brazilian oil giant, which has been granted a five year license to search for oil in the area.

Mr Key told TVNZ yesterday morning the protesters had stood in the way of legitimate exploration work that could benefit the New Zealand economy.

He linked Petrobras’ investment in New Zealand oil exploration to Government efforts to narrow the wage gap with Australia.

“I mean no one’s arguing that there are not environmental issues to consider, and everyone’s aware of what happened in the Gulf of Mexico, but at the end of the day this is very early days and we want New Zealanders to have better jobs and better incomes, and there’s a real opportunity here.”

Mr Key said he believed the environmental risks of deep sea oil drilling near the East Cape could be mitigated.

Any drilling would occur between 12 miles out to 200 miles off the coast “for the most part”, he said.

“We’re not going to progress unless we can manage those environmental risks, but I believe we can.”

Petrobras was sold the rights to explore for oil last year.

Its ship left Tauranga Harbour a week ago for the cape, where it planned to carry out seismic testing to explore the ocean for oil sediments.

Mr Abel said the flotilla of five protest vessels would carry on following the ship and hindering its work.

Their protest was about stopping a proliferation of deep oil rigs throughout New Zealand, he said.

“If we don’t stop his initial deep sea oil exploration, rigs could be off coasts all around New Zealand in the near future, each one increasing the risk of spills and fuelling climate change as the oil is burnt.”

The flotilla is supported by East Cape iwi Te Whanau a Apanui, which says the company had no right to be in the waters that lie east of their tribal lands.

“This is not a protest,” iwi spokesman Rikirangi Gage said. “This is an act of defence of our ancestral lands and waters that have sustained us for generations.”

The acting Minister of Energy and Resources, Hekia Parata, has also expressed her disappointment at the actions of the Greenpeace protesters.

“Petrobras has been awarded a five- year permit to explore what, if any, oil or gas prospects exist off the coast,” Ms Parata said. “They have just started the first phase of a 3-year research programme …

“Oil and gas exploration could contribute significantly to our economy.”

– By Hayden Donnell of NZ Herald, and NZPA

All that needs to happen is for exploration to turn up something positive to bring about an attitude change. – ‘What’s in it for me, how much can I grab?’