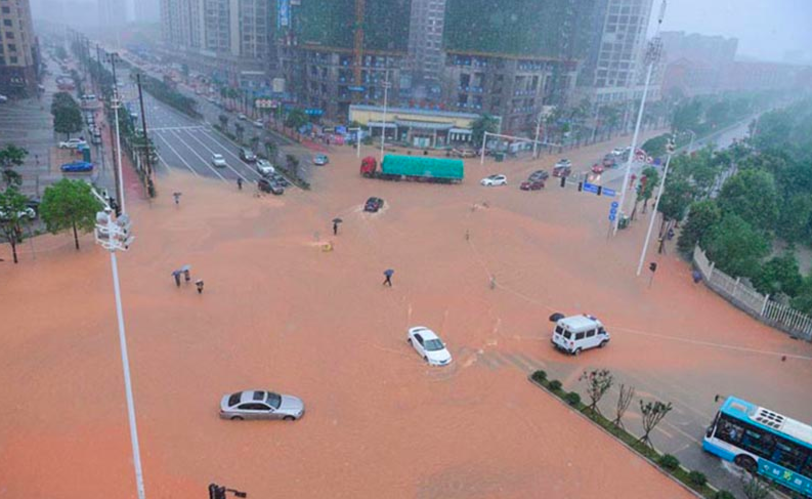 July 2017 was the planet’s second warmest July since record keeping began in 1880, said NOAA’s National Centers for Environmental Information (NCEI) on Thursday. NASA rated July 2017 as the warmest July on record, which means it was also tied for first place as Earthâ€™s warmest month in recorded history (see Joe Rommâ€™s report on this at climateprogress.org.) The only warmer July, according to NOAA, came during the strong El NiÃ±o of 2016. Minor differences can occur between the NASA and NOAA rankings because of their different techniques for analyzing data-sparse regions such as the Arctic.

Each of the first seven months of 2017 have ranked among the top three warmest such months on record, giving 2017 the second highest Januaryâ€“July temperature in the 138-year record: 0.90Â°C (1.62Â°F) above the 20th century average of 13.5Â°C (56.3Â°F). This is behind the record year of 2016 by 0.14Â°C (0.25Â°F). This near-record warmth is especially remarkable given the lack of an El NiÃ±o event this year. Global temperatures tend to be warmer during El NiÃ±o years, when the ocean releases more heat to the atmosphere. Given the lack of an El NiÃ±o event in 2017, it is unlikely that we will surpass 2016 as the warmest year on record.

In its August 10 monthly advisory, NOAAâ€™s Climate Prediction Center (CPC) stated that neither El NiÃ±o nor La NiÃ±a conditions were present in the Eastern Pacific (ENSO-neutral conditions existed), and these neutral conditions were expected to persist into September (85% chance.) Sea surface temperatures (SSTs) in the benchmark NiÃ±o 3.4 region (in the equatorial Pacific) were about 0.2Â°C below average over the past week; SSTs of 0.5Â°C or more above average in this region are required to be classified as weak El NiÃ±o conditions, with the 3-month average SSTs holding at these levels for five consecutive months (with an accompanying El NiÃ±o-like atmospheric response). A surge of enhanced east-to-west blowing trade winds is predicted for the west-central Pacific over the next two weeks, and these stronger-than-average trade winds will interfere with any progression towards El NiÃ±o.

NOAA forecasters gave a 15 – 20% chance of an El NiÃ±o event by winterâ€”a major downgrade from their previous monthâ€™s forecast, which gave a 35 – 45% chance. El NiÃ±o conditions tend to suppress Atlantic hurricane activity by bringing strong upper-level winds to the tropical Atlantic, creating high wind shear that tears storms apart. A reduction in the odds of El NiÃ±o boosts the odds of an active Atlantic hurricane season.

Arctic sea ice extent during July 2017 was the fifth lowest in the 38-year satellite record, according to the National Snow and Ice Data Center (NSIDC). The Arctic was dominated by a broad area of low pressure, which brought cloudy skies and slower ice loss than we saw in the record-low extent years of 2012 and 2007. The GFS model is predicting that low pressure and cloudy skies will continue to predominate in the Arctic over the coming two weeks, which should keep 2017 from breaking the record for lowest ice extent.

Antarctic sea ice extent the lowest on record for July

Sea ice surrounding Antarctica has been at unprecedented lows in recent months, setting an all-time monthly minimum extent record each month during the five-month period November 2016 â€“ March 2017, and again in July of 2017. Monthly Antarctic sea ice extent in April, May and June of 2017 were the second lowest on record for their respective months. A recent study by John Turner and colleagues links the recent Antarctic sea ice decline to a series of strong storms accompanied by long periods of warm winds from the north. These changing weather conditions are associated with large shifts in the Southern Annual Mode (SAM) index.

Notes: On 4 July, Summit (Greenland) recorded -33.0Â°C, which is the lowest temperature ever recorded in July in the Northern Hemisphere.

Things look a bit different on this report;
https://www.newswise.com/articles/global-temperature-report-july-2017