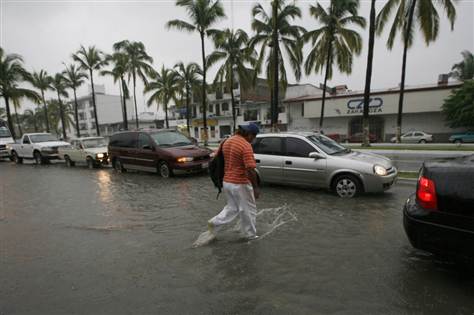 “Jova is landing on the coast of Jalisco, 45km south-east of Punta Farallon,” meteorologist Marco Antonio Lugo told AFP, adding that it was a category two storm on the five-point Saffir-Simpson wind scale.

The US-based National Hurricane Center had earlier predicted that Jova would weaken after hitting land but warned of heavy rains and life-threatening mudslides.

The bustling port city of Manzanillo had been bracing for the storm’s arrival, as Mexico issued hurricane alerts for large swaths of the Pacific coast and placed four southern coastal states on high alert.

A zone of some 500km could be affected by the storm, stretching from the port of Lazaro Cardenas in Michoacan state to the popular tourist area of Cabo Corrientes in Jalisco state.

The Miami-based NHC said in its most recent advisory, at 0300 GMT, that the storm was bearing down on the coast with maximum sustained winds of 160km per hour.