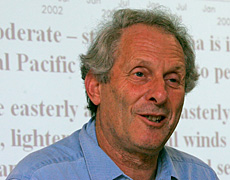 A therapist for sacked scientist Jim Salinger said he was speaking in a personal capacity only when he contacted TVNZ weatherman Jim Hickey about heavy rain on the West Coast.
Dr Salinger is seeking compensation through the Employment Relations Authority after claiming he was unjustifiably dismissed by his former employer, the National Institute of Water and Atmospheric Research (Niwa).
He was dismissed for allegedly ignoring a new Niwa policy against speaking publicly without prior approval.
One case cited by Niwa was when Dr Salinger rang Mr Hickey to say that rivers were in flood on the West Coast of the South Island.
Niwa said the river had not passed the level where it was officially in flood, and Dr Salinger did not have the authority to call Mr Hickey on Niwa’s behalf.
Giving evidence before authority member Leon Robinson in Auckland, Dr Rui Mendel said he did not think Dr Salinger made the call on Niwa’s behalf.
“Dr Salinger spoke at a personal level, he wasn’t working at that stage,” Dr Mendel said.
Asked by Niwa’s lawyer Peter Churchman if he was aware Mr Hickey told viewers he had been told of flooding on the West Coast “by Jim Salinger of Niwa”, Dr Mendel said it was Mr Hickey that made the link and not Dr Salinger.
Dr Mendel said earlier that he thought Dr Salinger was the victim of bullying by Niwa management, particularly over enforcement of a new media policy requiring Dr Salinger to get clearance from managers before speaking to media on some topics.
He agreed with Mr Churchman that Niwa had the right to set media policies, but he thought changes in enforcement which impacted on Dr Salinger were not handled well.
Among those giving evidence today was another climate spokesman with a public profile, MetService weather ambassador Bob McDavitt.
Mr McDavitt said he didn’t exactly know Niwa’s media policy but he knew MetService’s was different because he didn’t need to call a manager if a reporter rang asking for factual information.
He told Mr Churchman that media questions on policy matters had to be referred to different people.
Dr Salinger is due to face questioning this afternoon.
Dr Salinger is not seeking his job back but does want compensation for lost income up to 2012, along with $104,000 lost superannuation money and $50,000 in compensation for humiliation and loss of dignity.
The hearing is expected to take a week.
Source: NZPA

We haven’t heard NIWA’s side yet! That comes on Wednesday. I don’t like the ‘scientific ethic’ defence for Jim. What about the ethic of an employee following the instructions of the employer?

NIWA are in trouble here. Very poor evidence for them so far.