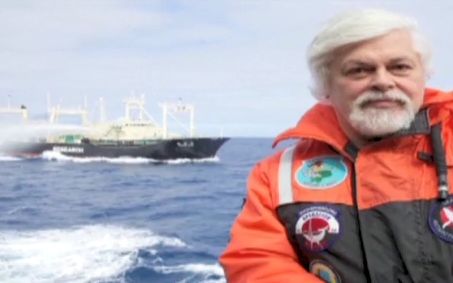 CNN — Japan has canceled the rest of its winter whaling season, with a top official reasoning that environmentalists’ obstructive efforts made it dangerous for whalers to stay on the high seas.

Japanese Minister of Agriculture, Forestry and Fisheries Michihiko Kano told reporters Friday that the country’s government halted whaling because of actions taken by the animal rights group, Sea Shepherd. He stressed that Japan did not want to do so, but felt its hand was forced.

“From the viewpoint of our crew’s safety, we have decided to cut short the research whaling at this time, against our will,” he said.

The decision marks the first time Japan has canceled its whale hunt in the waters of the Antarctic since it started the practice in 1987. In 2005, Sea Shepherd began its bitter battle with Japanese whalers, monitoring them and occasionally getting into altercations. What Japan calls its winter whaling season typically extends into mid-March.

On Thursday, Hiroshi Kawamura, a government official in charge of research whaling, said Japan had decided to a temporary halt while it determined its next step — one that it later ended up taking .

Japan has left its fleet of four whaling vessels in the Antarctic, as it decides what to do about the winter hunt, according to the ministry.

Capt. Paul Watson, who is helming a Sea Shepherd vessel called the Steve Erwin off the coast of Antarctica, said early Friday that at least some of those whalers were still in the Antarctic region.

“If it’s true, this is great news,” said Watson, who heads Sea Shepherd’s operations in the Antarctic. “But we’ll keep tailing them until they leave these international waters.”

Watson said he and his colleagues have gained momentum and numbers steadily in recent years, while Japanese whalers have become less of a force — especially economically. He suggested that his group was able to “bankrupt” the fleet so that it wasn’t economically feasible to keep going..

He said it was wrong for the Japanese minister to label him and others as dangerous, adding that no one has ever been hurt in their efforts.

“We’re getting more support every year, so it’s working out that we’re wearing them down,” Watson said. “We’ve found a way where, once we’re on them, they can’t kill whales.”

Critics call Japan’s hunt a cover for commercial whaling, since the whale meat ends up in supermarkets and restaurants. Animal rights groups, from Greenpeace to Sea Shepherd, and the governments of Australia and New Zealand, have publicly condemned Japan’s hunts.

“I hope this is the end of whale hunting by Japan,” said Watson. “But if they return next year, we’ll be here.”