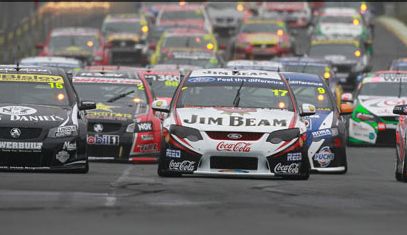 The weather for the ITM400 in Hamilton is looking excellent – if you like a fast race that is.

Winds will be light due to the large high moving in – with wind speeds less than 8km/h, or walking speed.

Overnight lows will be in the upper single digits with highs around 20.

WeatherWatch.co.nz says the chance of rain is less than 5% – which may disappoint some fans who love the surprise of a wet track to make for more thrills – and of course spills.

WeatherWatch.co.nz says any potential precipitation would likely be in the form of a light drizzle shower should anticyclonic gloom come in (low cloud trapped under a large high that drifts in from the Tasman Sea).  However this currently isn’t being predicted.

POLL – Who will win the ITM400 in Hamilton?  Ford or Commodore?

Ford won last year – making two wins each for both car manufacturers over the past four years.

Who will win the ITM400 in Hamilton?

Bring back the mighty Skyline GTR I say.

Oh well, the mighty Nissan got onto the track as a safety car at least, and was always in the lead ha.