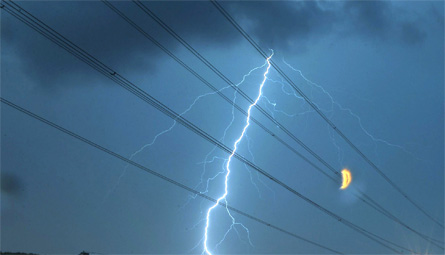 A very large low pressure system continues to churn off the nation’s west coast and brought dramatic weather to parts of the North Island last night.

An electrical storm hit Taranaki with reports of a small tornado damaging buildings.  Lightning was dramatic, flickering every few seconds, along with thunder directly overhead, heavy rain and hail.

Severe thunderstorm warnings were issued for the Coromandel region at 2:30am followed by similar warnings shortly after for the Gisborne region.

Aucklanders who stayed up late enough could see the dramatic lightning event to the north east of the city overnight.

The main event still hasn’t arrived with the large low only very slowly drifting towards the country.  “The closer it gets to New Zealand the more the energy builds and the more unstable the atmosphere gets” says head weather analyst Philip Duncan.

“Again, due to the shape of Northland the rain clouds mostly missed Auckland however heavy showers pummeled Taranaki to the south, Northland to the north and Coromandel to the east”.

Some will be disappointed with the lack of action over Auckland.  The area is still officially in drought.  Weather enthusiasts will also be disappointed that the action is happening around the city.  “Systems like this do tend to favour Northland and Taranaki however we have to mention thunderstorms in our forecasts as we have all the right ingredients for them.  As you can see the storms were incredibly close to Auckland.  Some will say Aucklanders were lucky, othes will say the oppostite”.

Mr Duncan says more lightning will be on display in Auckland tonight.  “This weather set up will continue right through until Monday delivering more heavy showers to places like Northland, Bay of Plenty, Gisborne, Coromandel and Taranaki”.

“Auckland should see the lightning again tonight and as that low inches eastwards the chance of a thunderstorm over Auckland increases – it ain’t over til the fat lady sings”.

The large low is expected to impact the country well into next week as it slowly moves to the east.

The rain radar this morning showers intense showers continuing to feed into Taranaki and eastern Bay of Plenty.

Hi there, wow we had a few good lighting storms here in Tauranga last night. Starting at about 2:00am till about 5am.

Is there more on the was for Tauranga? At the mo {at 8:53am} the sun is out with broken cloud around…