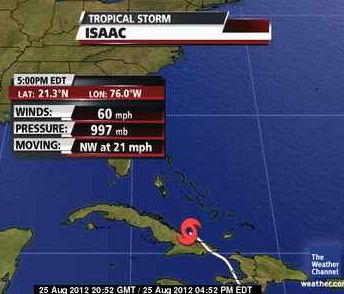 Tropical storm Isaac continues to make its way toward the United States after pounding eastern Cuba, Haiti and the Dominican Republic with torrential rains.

At last report which was at 5:00pm Eastern US Time or 9:00am NZT, Isaac was still a tropical storm with maximum sustained winds of 97 km/h and a central pressure of 997 hPa (hectopascals).

A tropical storm becomes a hurricane when the maximum sustained winds reach 117 km/h.

Hurricane warnings remain in effect for the Florida Keys, an island chain off the southern tip of the Florida Peninsula.  It is an extremely popular tourist destination, but is very vulnerable to a hurricane strike due to the size of the islands and the fact that the island chain’s only over-the-land connection with the mainland is a two-lane highway.  The local airport has been shut down.  Tourists are being asked to leave as soon as possible, if they have the means.  Over the next 36 hours, 150-250mm of rain is expected along with winds up to 120 km/h.  Tornadoes are also possible.

The storm is expected to reach Category 1 Hurricane strength Sunday night (Monday Afternoon NZT).  This will be about 12 hours before the storm crosses the Florida Keyes.

Then, the storm will begin a bit of a northerly turn and it will begin to move toward the Florida Panhandle.  This means that the entire state of Florida will be affected by this storm.  Tropical storm warnings cover much of the southern half of the peninsula.  This includes cities like Fort Lauderdale, Miami and Naples.

A little further up the west coast of the peninsula is the city of Tampa, Florida…currently under a Tropical Storm Watch.  It is of particular concern because the city of 335,000 is home to the Republican National Convention this week.  A gathering of one of the two major political parties in the US.  This is where the party will nominate their candidate for President.  Tampa is likely to be struck by tropical storm force winds.  Possibly even hurricane force winds.  Tornadoes are a real threat as well.  Flooding rains, power outages, etc.  It could be a real mess starting on Sunday afternoon (Monday morning NZT) and lasting into Monday night (Tuesday afternoon NZT).

Isaac is still expected to make landfall somewhere along the eastern gulf coast Tuesday evening (Wednesday afternoon NZT).  Most of the models point to a landfall around the far western end of the Florida Panhandle.  Isaac is now forecast to be a Category 2 hurricane with maximum sustained winds around 160 km/h.  Because of the Isaac’s huge size, it’s likely that the entire gulf coast will be affected.