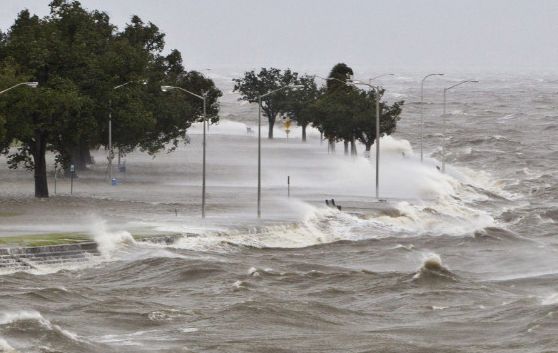 Hurricane Isaac’s relentless lashing of the Gulf Coast flooded streets and homes in part of Louisiana Wednesday as the slow-moving storm threatened to keep churning for another day.

Dozens of families that had ignored mandatory evacuation orders in a low-lying area retreated to their attics and roofs and sought rescue amid the howling winds and pounding rains.

The punishing conditions will persist “all day today, into tonight, into tomorrow,” said Richard Knabb, director of the National Hurricane Center.

While barely at hurricane strength, Isaac was creeping across the region at only 6 miles per hour, giving it a long time to inflict damage.

Louisiana Gov. Bobby Jindal said there was a report of a fatality in a fire early Wednesday, but that officials had not confirmed the report.

Officials were quick to emphasize that the huge federal investments in recent years to avoid a repeat of Hurricane Katrina’s horror had worked.

“The system that the country invested in is absolutely paying off,” said Louisana Sen. Mary Landrieu.

Despite the “terrible, determined, and nasty storm,” there has been “no massive and catastrophic flooding,” Landrieu said, crediting “the extraordinary investments.”

“There is no evidence of any (water) overtopping (canals)” in the city, New Orleans Mayor Mitch Landrieu said. “We have full confidence the levees will hold.”

But in nearby Plaquemines Parish, a levee overtopped, creating a kind of flooding the parish did not even see during Hurricane Katrina, which hit seven years ago today.

More than 150 calls came in to 9-1-1 from people wanting to be rescued, said Terry Rutherford, commander of authorities in Plaquemines Parish.

By mid-morning, 75 people had been rescued from flooded homes and rooftops in Braithwaite in Plaquemines Parish, CNN affiliate WWL reported. At least 25 others were awaiting rescue on the parish’s east bank, the report said, citing parish President Billy Nungesser.

Emergency management officials reported the overtopping of an 18-mile stretch of the back levee from Braithwaite to White Ditch, the National Weather Service of New Orleans said.

The levee is maintained by the parish and is not part of the federal hurricane protection levee system, according to the National Weather Service.

Katrina breached the levee in two places, the Army Corps of Engineers said.

“It’s very unfortunate that people did not heed the warnings,” Sen. Landrieu told CNN, adding, “our hearts go out” to them.

“Now the Coast Guard’s got to go out with winds still gusting to 110km/h in some areas” to save them, she said.

The New Orleans levee system and pump stations were working furiously to deal with the deluge. The system was rebuilt and reinforced at a cost of $14 billion after it failed when Katrina struck in 2005. Nearly 1,800 people died as a result of that storm, the majority when levees failed and flooded.

Landrieu said she was among some officials who had pushed for Plaquemines Parish to be included in the federally funded projects, but that the corps follows a formula “based on economic impact” that leaves out some rural or sparsely populated areas.

However, Jindal said federal dollars were appropriated for that levee since Katrina, but so far not been used for construction, although there had been some kind of construction done on the levee.

Officials were considering intentionally breaching the levee to allow some of the flood waters to flow back out of the inundated area, Jindal said.

Isaac could bring 350mm of rain to the region, and as much as 500mm (half a metre) is possible in some areas, including parts of Louisiana, Mississippi, and Alabama, the hurricane center said.

– Extensive coverage from CNN can be found here