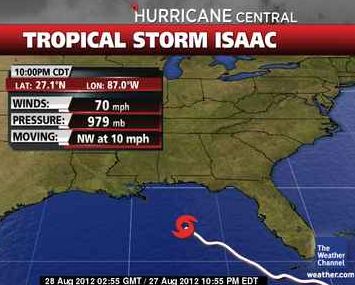 As of 10:00 pm Central US time (3:00 pm NZST), Isaac was still below hurricane status.  Some deepening of the central pressure has been noted over the last several hours, however the maximum sustained winds aren’t increasing.  In fact, they weakened just a bit.  But, that can happen.  Especially with a storm this size.  The winds don’t respond right away to a drop in pressure.

Isaac is still trying to recover from a shot of dry air it has picked up.  But, all the images and data point to Isaac starting to strengthen again and it will likely be a hurricane when the new update is released at 4:00 am Central US Time (9:00 pm NZST).  However, I still do not see a rapid strengthening of this storm taking place.  It looks quite likely that it will come ashore as a Category 1 hurricane.  If there is rapid strengthening overnight, it might make a weak Category 2, but that seems unlikely.

It’s important to note that this is a huge storm.  In terms of how much area it covers.  The tropical storm force winds extend 335 km from the centre.  That’s roughly the same distance as it is from Auckland to Wellington.

Even as a Category 1, Isaac is still expected to produce up to 500mm of rain.  Sustained winds of 130 to 140 km/h as it makes landfall, with higher gusts likely and isolated tornadoes are possible.

Believe it or not, there is some good news.  As Isaac moves north, it will take its drenching rainfall across some of the driest parts of the continental US.  A lot of rain over a short period of time over drought-stricken ground is not ideal.  A lot of it is likely to run off.  However, I think the people in Arkansas, Missouri, Iowa, Wisconsin, Illinois and Indiana will be happy with any rain they get.  It won’t bust the drought, but it’s a start.