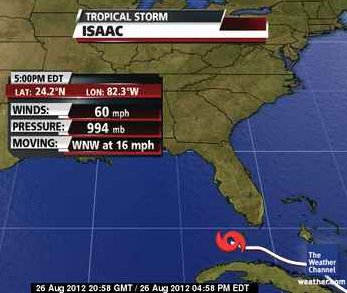 Two big areas of high pressure, one on either side of the south-eastern United States, created a path for Isaac.  A trail for it to follow.

Except, when the highs shifted, so did the track.  And now, instead of Isaac heading for the Panhandle of the US state of Florida, it’s headed for the same spot that was devastated by a hurricane 7 years ago; New Orleans, Louisiana.

Back then, it was Hurricane Katrina that was being watched.  The storm cut across the far southern tip of the peninsula of Florida as a Category 1 before heading west into the Gulf of Mexico and taking a turn to the north.  As it headed northwest, it rapidly grew into a Category 5 hurricane.  The Saff-Simpson scale doesn’t go any higher than that.  At its strongest, it had maximum sustained winds of 280 km/h.

As it approached New Orleans, it weakened to a Category 4…and then finally, just before making landfall, it weakened to a Category 3.  Despite the weakening, it was still the single costliest natural disaster ($81 Billion USD) ever in the United States.  It killed 1,836 people.  It flooded 80% of the city and adjacent areas.  The damage was even worse in the state of Mississippi where severe damage was done to beachfront towns.

Now, Tropical Storm Isaac is looking to make landfall at about the same spot, on the 7th anniversary of the Katrina strike.

The US’s National Hurricane Centre forecasts landfall will be near New Orleans, Louisiana on Wednesday morning (late Wednesday night NZT).  It is forecast to come ashore as a Category 2 hurricane with maximum sustained winds of 154-177 km/h.

Hurricane warnings now cover a large part of the northern Gulf Coast of the US, from about New Orleans, Louisiana to the Florida Panhandle.  In the hurricane warning area, storm surge is expected to be between 2 and 4 metres.  Rainfall totals could be between 250-400mm with some isolated 500mm totals possible.  Tornadoes are also possible.

The exact location and timing of landfall is still a bit uncertain.  All the models show great confidence in taking Isaac on a track that brings it very close to New Orleans.  Personally, my thinking is that landfall will be just west of New Orleans.  A bit further west than it currently forecast.  That’s based on the consistent westward trends we’ve seen in the models the last few days.

Nevertheless, this storm poses a serious threat to the coasts of the states Louisiana, Mississippi, Alabama and the western panhandle of Florida as well as far eastern Texas.