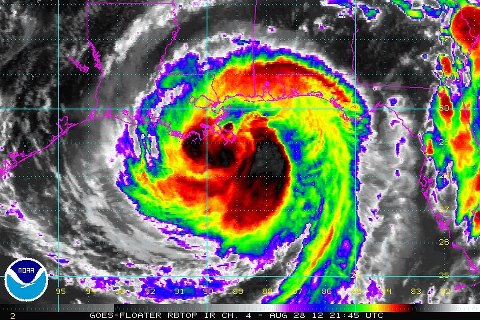 Hurricane Isaac has started to make landfall in Louisiana.  Isaac had maximum sustained winds of 129 km/h.  That means it’s still a Category 1 hurricane.   Forward motion was to the northwest at 13 km/h.

So, it is clear that Isaac is still growing.  In fact, latest radar images indicate that a smaller eye is trying to form which would mean even stronger winds.  But, with landfall imminent Isaac is likely to run out of fuel before it can get much bigger.

Hurricane conditions will continue to batter New Orleans, as well as the Mississippi, Alabama and Florida gulf coasts for at least the next 24 hours.

The heaviest rain though, still looks like it will be funnelled right into the heart of New Orleans and the Mississippi and Alabama gulf coasts.  Up to 500mm of rain is possible.

Combine that with a storm surge of 2 to 4 metres and major flooding is all but imminent.

New Orleans TV station WWL-TV reports more than 40,000 people are without power around New Orleans.  Some power has actually been restored, but with the strongest winds yet to come…more outages will happen.  The New Orleans International Airport (Louis Armstrong International) is closed.  Rail service has been suspended.  Local municipalities are setting up curfews.  Major stores, like the Winn-Dixie grocery store chain are closing.

From here, Isaac is expected to head north into the central part of the US mainland where the heavy rains will bring a small amount of relief to the drought-stricken Midwest.

Isn’t it 7 years almost to the day that Katrina hit New Orleans?

Well done HAARP, you got it spot on.