Isaac is now a hurricane 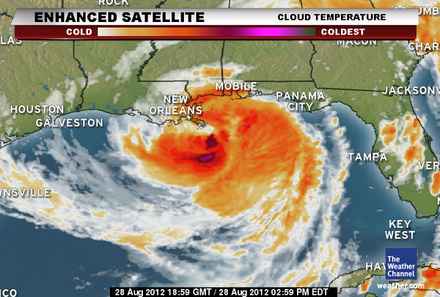 As of 1pm Central US time (6am NZST), Isaac was a Category 1 with maximum sustained winds of 121 km/h and a central pressure of 975 hPa.  The storm is moving northwest at 16 km/h.  Isaac will make landfall near New Orleans, Louisiana within the next 6-8 hours.

A storm surge of 2-4 metres is still expected.  Up to 300mm of rainfall is expected about New Orleans and the state of Mississippi’s coastal sections with some isolated 500mm amounts possible.  Isolated tornadoes are also possible

Isaac is a huge storm.  That is the reason the pressure was able to drop so low whilst the storm remained a tropical storm and low end hurricane.  The fact that is so big, means the tropical storm/hurricane conditions will be felt for an extended period of time.

On the other side of the world, our own weather will be pretty settled for the next few days, with a few exceptions of course.

A small area of low pressure will move across the upper tip of the North Island tomorrow.  That will bring rain chances to Northland, Auckland, Waikato and Bay of Plenty early in the day.  The precipitation could extend south to Hawkes Bay during the evening.

The rest of the country should be settled.

Friday is looking like dry day for the entire country as a large ridge of high pressure take over.

Saturday could be a bit wet for the western South Island.

Sunday is looking damp for much of the North Island as well as western and upper parts of the Mainland.

Gees, that is some phenomenal rain that is expected.

I hear reports that the storm will take up to a day to cross some areas. I also assume that the heaviest rains will be felt in areas where the storm takes the longest to cross, close to the track of the ‘eye’ of the storm. Nevertheless, 500mm of rain in a day is basically an AVERAGE of 20mm per hour for the whole day.

In it’s local rain warnings, MetService considers anything above 25mm per hour to be torrential, and once you get up to 40mm per hour in thunderstorms that is considered a ‘downpour’. But I can imagine that if 500mm is to fall in a day, then there will be some points where rainfall rates will be as high as 75-100mm in an hour when it is at it’s heaviest.

No wonder these tropical cyclones cause so much flooding, wherever they go.