Home > News > Isaac continues to head for US Gulf Coas...

Isaac continues to head for US Gulf Coast 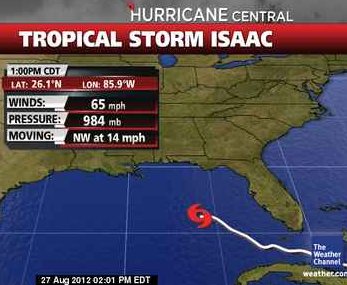 As of 1:00 pm Central US Time (6:00 am NZT), Isaac was still a tropical storm.  Maximum sustained winds were 101 km/h.  It continued a northwest track and is still likely to make landfall on the US Gulf Coast near, or just west of, New Orleans, Louisiana.  It looks like landfall will occur sometime Tuesday night or very early Wednesday morning (Wednesday evening/night NZT).

It still looks like Isaac will be a hurricane when it makes landfall.  However, I think it may not be as strong as was being forecast yesterday.  So, it may come ashore as a Category 1 rather than a strong Category 2.

First, the storm is already starting to slow down.  It’s moving at a pretty good speed right now (23 km/h).  But it is slowing down and will continue to do so as it strengthens.  Combine that with it’s very large wind field, and people in New Orleans and the surrounding area could be looking at a full day’s worth of tropical storm/hurricane force winds in the warning area.

Also, as it slowly approaches the coast, the water continues to pile up.  That will lead to a storm surge anywhere from 2 to 4 metres.

There will also be torrential rains.  The slow movement of the storm combined with the huge precipitation will likely mean 250mm-400mm of rainfall with isolated 600mm amounts possible.

Evacuations are taking place along the gulf coast within the warned area.  Over 40 off shore oil rigs have also been evacuated.

The track is still a bit uncertain.  Most models do continue to send Isaac further west than the current forecast track.  That’s what I have also believed would happen.  Yesterday I mentioned that the consistently westerward trend in the models seemed to indicate that they weren’t through shifting that direction.  So, look for more track changes with the landfall target likely moving a bit west of New Orleans, Louisiana.

However, I don’t think it will shift as far west as Houston, Texas.