Home > News > Is Darwin the lightning capital of the w...

Is Darwin the lightning capital of the world? 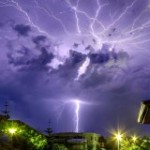 The tropics get some of the biggest, most dramatic storms in the world.

And during the wet season, the Top End puts on a spectacular lightshow that is a storm chaser’s dream, although it can be more of a nightmare for office workers who stagger in, bleary-eyed, after a particularly loud night.

Over Christmas Day in the Darwin region, the Bureau of Meteorology (BOM) said more than 91,000 strikes were recorded.

Surely all that racket is worth a world record of some kind?

Nathan Franklin grew up in Darwin, buffeted by the storms that rage six months of the year, and his parents had plenty of theories about them.

“Is Darwin the lightning capital of the world?” he asked.

This story is part of Curious Darwin, our series where you ask us the questions, vote for your favourite, and we investigate. .

Dr Franklin’s father used to work at Pinelands, on Darwin’s outskirts, at a receiver station that used to feed weather data to Malaysia and Japan, among other places.

“They used to get a lot of lightning strikes, an unbelievable amount, and the whole station would be out for days Ã¢â‚¬Â¦ lightning would go through the building,” he said.

“Anecdotally, you hear that [neighbouring suburb] Berrimah gets the most lightning strikes.

“My dad has a theory that’s got to do with the fact that apparently there’s a lot of ironstone around Berrimah, which is a great conductor or a great attractor of lightning, I guess.”

Lightning is a phenomenon that has long been observed by the Bininj Aboriginal people of Arnhem Land, who believe that Namarrgon is the creation ancestor responsible for dramatic weather.

“The Indigenous Australians tens of thousands of years ago have observed, ‘well jeez, there’s a lot of lightning here’, and they’ve named a spirit after him,” Dr Franklin said.

Namarrgon uses axes attached to his head, elbows and feet to split the dark clouds and make lightning and thunder as he travelled across the region.

“We can see his figure in the caves where the elders painted, up in the rocks,” said Simon Bardari from Gunbalanya.

Mr Bardari said Namarrgon left traces of himself in the landscape in the form of rocky outcrops.

How does lightning work?

Lightning is an electrical discharge that usually occurs within weather-bearing clouds, which are quite violent events during thunderstorms.

“The updrafts and downdrafts can cause what we call charge separation, and electrons and positive ions will travel around in the cloud and the electrical imbalance we see as lightning is the discharge of electricity,” said Jackson Browne, who is a meteorologist with the Bureau of Meteorology in Darwin.

Storms that occur over land generally produce more lightning than those out at sea, because there’s more dry air in their upper levels, he said.

“Whereas if we enter monsoon period where we’ve got moisture all the way up through the atmosphere, we tend to see very little lightning, and that also holds true for tropical cyclones.

“Lightning in a particular area really depends on how active the storm is and how fast it’s moving.”

He said a conservative estimate would be about 2,000 lightning strikes during an average storm, reaching 5,000 to 10,000 strikes during bigger storms.

NASA, the American space agency, says more than 2,000 storms are active in the world at any given moment.

Is Darwin number one?

There are three main ingredients that determine how much lightning will occur during a storm, Mr Browne said.

“We need heat, instability, and moisture, and Darwin’s got that in bundles; much more broadly speaking we have those three ingredients across the tropics of the world,” he said.

Steven A Rutledge, a professor of atmospheric science at Colorado State University, has conducted research around Darwin with NASA and the BOM in the 1980s and 1990s.

“This whole area of Borneo, Indonesia, Malaysia, and the northern end of Australia, that’s a major weather area on the planet,” he said.

“We have to understand the characteristics of those thunderstorms, because they heat the atmosphere when water vapor condenses into water, and that provides a source of energy that helps really drive the winds around the entire planet.”

“That’s why the weather systems in Darwin are so interesting, because they play a really key role on the global scale.”

“We used to be, or very close to it, that was going off some old methods of how we used to judge whether a place was lightning prone,” he said.

“[Such as] whether a weather observer could see it, or hear the lightning, that was considered a lightning observation.

“There’s obvious flaws with that, you need maybe a westernised city, a population centre, and you need trained weather observers to observe that, and that’s not true for most of the tropics.”

He said many of the regions where lightning concentrates are sparsely populated, in poorer countries which may not have access to the latest technologies.

Now, lightning is observed from space, which has changed which areas meteorologists believed to be most lightning prone.

Today, with 232 flashes per square kilometre per year, on up to 300 nights.

The Democratic Republic of Congo gives it a run for its money as the most lightning-prone country in the world, taking out five of the top 10 sites, .

Tropical and equatorial countries make up the bulk of the list, including Colombia (number 4), Pakistan (number 6) and Cameroon (number 8).

Derby in WA takes out the top Australian spot at number 61 worldwide, Kununurra is second at 83, and McMinns Lagoon outside of Darwin is third at 355.

Darwin straggles in fourth for Australia, at 381.

Mount Isa in Queensland is fifth at 471 worldwide, and Halls Creek in WA is sixth at 477.

Does metal in the ground attract electricity?

There’s a lot of anecdotal chatter that lightning is attracted to metal deposits in the ground, as suggested by our questioner Dr Franklin.

America’s National Weather Service forecasters say that’s a myth, and that although metal conducts electricity, it doesn’t attract it.

Professor Rutledge said lightning was more attracted to conducting objects between the clouds and the earth, rather than minerals in the ground.

“It’s a bit wishy-washy. It’s generally what the atmosphere’s doing, those three ingredients that create the storms in the first place are the overriding factor,” he said.

“There’s been some conjecture on that, but I’m not sure it really stands up to scientific thresholds.”

How do you protect yourself from a strike?

It is estimated there are five to 10 deaths a year from lightning strikes in Australia, with more than 100 people seriously injured.

Worldwide, NASA says lightning is responsible for about 24,000 deaths per year, 240,000 injuries per year, and millions of dollars in property damage.

“We often read about lightning strikes on properties in Darwin, and recently a man was killed by lightning in WA. How can we be safe from lightning and what to do when lightning activity is intense at this time of the year?” Curious questioner Paddy Monahan wondered.

If caught out during a storm, there’s some obvious precautions you can take: seek shelter, or go indoors. If you’re caught out in the open in an insulated hard-top car, don’t touch any metal surfaces.

“If you are stuck right out in the open, try and stay away from isolated trees, try not to make yourself prominent,” Mr Browne said.

“So if you’re in an open field, clear off. If you find yourself in a very dire situation with lightning on top of you, try to stand with your feet as close as possible together, but not quite together, and that way if the lightning does strike near you, the electricity’s not going to have much potential to cross your body and cause you injury.”

Who asked the question?

Nathan Franklin is a lecturer in Indonesian studies at Charles Darwin University.

He’s currently based in South Korea with his wife and two kids, but his parents moved to Darwin during the post-Cyclone Tracy reconstruction period, and he grew up with dramatic storms every wet season.

“Having a lot of family interstate, Darwin is seen [by them] as typical Australia Ã¢â‚¬â€ a modern city but still kind of rural and still got that rough and tough cowboy image,” he said.

Lightning does a lot of damage to infrastructure in the Top End, which got him wondering whether iron ore was attracting it, or if the lightning was caused by something else.