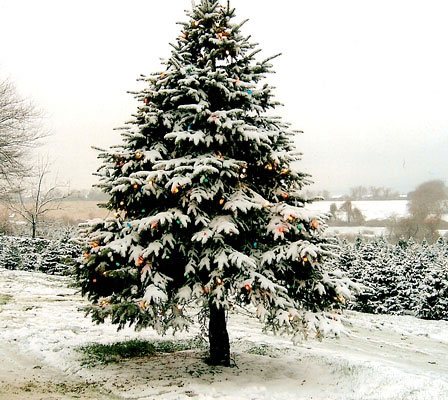 “It gave us an eye opener, you know, something we hadn’t anticipated,” says Sandy Wilmot, a Forest Health Specialist with Vermontâ€™s Department of Forests, Parks, and Recreation.

Bob White’s Christmas trees withstood the heat then, but as he surveys his Essex farm this year he’s discovered a new problem.

“It probably took out as much as half the farm,” White says.

“You get used to 20-30 years of how everything works, and now you don’t know anymore,” he said.

To protect his livelihood, White is moving some of this farm to higher ground. It’s not a luxury all farmers have.

“You can do little steps, but when mother nature wants to unload on you, get out of the way.”

With seventy-five percent of Vermont’s landscape covered by trees, itâ€™s obvious that forests are big business in the Green Mountain State. According to the Northeast State Foresters Association, the economic benefit of Vermont forests is a staggering $1.5 billion, that includes things like Christmas trees and maple products. Forest health specialist Sandy Wilmot says those forests face major challenges.

“We’ve already seen some dramatic changes in the last fifty years,” she says.

In those fifty years, winter temperatures spiked some four point five degrees. Summer temperatures, two degrees. Additional warming will change the make up of our forests.

“Maybe shifting away from some of the balsam firs or red spruce trees to more of the oak, hickory forests,” Wilmot said.

“This past September the Intergovernmental Panel on Climate Change, a group of renowned climate scientists from around the world, issued a new report saying itâ€™s virtually certain there will be more hot days and fewer cold days going forward. That will continue to impact the Christmas tree crop, as well as Vermont’s famed maple products.”

In the woods near UVM’s Proctor Maple Research Center, Dr. Timothy Perkins keeps a close watch on the sugaring season. It’s already arriving earlier than it did fifty years ago.

“We see the changes happening fairly quickly. Over the past fifty years the duration of the season has shortened about 10 percent,” he said. So far, the industry has been able to adapt to the shorter seasons.

“Maple producers have gotten much better at collecting sap so yields, yields per tap, are considerably higher than they were,” Perkins says.

Over the next few decades, Dr. Perkins expects the season to shrink even more.

“Without some break through in collection techniques, there could be an impact on collection,” he said.

“Some of that is very dramatic with temperatures that might mirror something in Virginia, or farther south,” she said.

To combat the change, the state is making sure there are a variety of types of trees grown in our woods. That makes sudden losses to any one type of tree less likely during extreme weather.

“We can’t wait any longer to anticipate what’s going to happen with additional changes in climate,” Wilmot says.

There is some good news for the maple industry. Just this month researchers at the Proctor Maple Research Center unveiled a new method of collecting sap. It involves cutting the top of maple saplings, and Dr. Perkins says this may ease future climate change impacts.