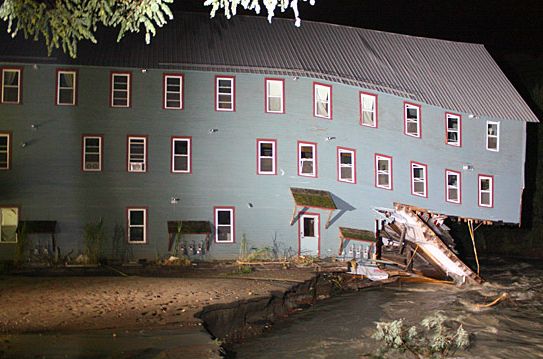 The skies may have cleared, but an assessment of the storm’s damage has only just begun.  As a much-weakened Irene entered Canada, it left parts of the U.S. East Coast grappling yesterday with dangerous floodwaters and widespread power outages.

At least 27 deaths in nine states have been blamed on Irene, which fizzled to a post-tropical cyclone and headed over eastern Canada.

“A lot of the activities are moving into recovery phases, but we are still very concerned about the flooding,” Fugate told reporters.

Southern states were affected primarily by power outages and the effects of the storm surge, particularly on the Outer Banks of North Carolina, where Highway 12 had been chopped into pieces in several place by the pounding surf.

As of early afternoon, about 5 million customers were without power, Fugate said, citing figures from the Department of Energy. That was down from about 6 million earlier, he said.

In New York, torrential rains washed out roads and bridges, flooded homes and some businesses. The town of Prattsville was struck particularly hard.

“The amount of damage is devastating in some areas and will get worse before it gets better,” New York Gov. Andrew Cuomo said Monday.

In Vermont, the governor warned that further flooding and loss of life are likely for the small, rural state. While small brooks have crested, large rivers have not, he said.

David Vallee, a hydrologist for the National Weather Service in charge of the Northeastern forecast center in Taunton, Massachusetts, said rainfall reached 15 inches in some places. The fact that much of the affected area was already heavily saturated by rainfall in the weeks prior to Irene made things worse, he said.

Moderate to major flooding was occurring from New York into the Connecticut Valley, through much of northern New Hampshire “and a good chunk of Vermont.” Many of the river crests set records, he said.

In New Jersey — which had called for the evacuation of more than 1 million people from the shore — initial fears about coastal flooding gave way to fresh concerns about inland flooding, as an array of rivers and creeks eclipsed flood stages and continued to rise Monday.

That left residents like Guy Pascarello, whose family’s Secaucus home of 40 years was declared uninhabitable after it became inundated by 3-foot-high waters, trying to figure out what to do next.

“This is all new ground,” Pascarello said. “The good news is that it’s just stuff. This is a home and we love our home, but it’s just things.”

Asked how FEMA has changed its approach to handling disasters six years after Hurricane Katrina laid waste to much of the Gulf Coast, Fugate said the agency now has more authority to act prior to receiving a request from a governor. That translates into “not having to wait” until the impact of the storm is clear. “We have to act quickly and be prepared to support that.”

In Washington, President Barack Obama vowed, “We will make sure folks have all the support they need.” He added that “it will take time” to recover.

They may need that support from North Carolina through New England, where a number of homes, businesses, roads and bridges were torn apart by floodwaters.

Some of the worst flooding since 1927 ravaged Vermont’s normally tranquil countryside, turning babbling brooks into turbulent rivers and knocking homes from their foundations.

In Wilmington, Vermont, a young woman who had been standing near a river was swept away by the water. Her body was recovered Monday. One person is still missing in Vermont and feared dead, authorities said.

In all, 260 roads were affected, many of them underwater, Vermont’s Emergency Management Agency said Monday.

In the capital city of Montpelier, water crested overnight at 19.5 feet, just shy of the 20-foot prediction, but levels throughout the state were receding Monday.

The emergency management headquarters flooded overnight and was evacuated and relocated from Waterbury to Burlington, approximately 20 miles away.

“We never see this sort of thing in Vermont,” said CNN iReporter Jesse Stone of White River Junction, where a covered bridge was flooded. “For the people who are saying that Irene was disappointing, maybe, because they didn’t get the sort of wind and damage they expected, I just want to remind them that, in places like Vermont, we really got it pretty hard.”

In North Carolina, more than 340,000 customers were without power Monday, down from more than 440,000 on Sunday night, the state’s division of emergency management said.

Dominion Power reported more than 600,000 customers were without power in Virginia and northern North Carolina. The company predicted it would restore power to 95% of those customers by Friday.

In Connecticut, Gov. Dannel P. Malloy said Monday that nearly 700,000 customers were without power. Though power was restored to another 220,000 customers, some of the remaining number were going to have to wait for a week or more “because there has been extensive damage to the system.”

In all, more than 8,500 people awoke Monday in Red Cross shelters up and down the East Coast, a spokesman said.

But life along much of the East Coast returned to normal, as subway services resumed on all 22 lines in New York City, and the three major airports in the area reopened after thousands of flights were canceled over the weekend. Flight schedules were expected to normalize slowly and passengers were urged to check with their airlines before going to the airport.

Amtrak canceled many trains, but had some service in the Northeast.

Across Pennsylvania, 225,000 customers were without power Monday, according to Cathy Engel, a spokeswoman for PECO, which serves the Greater Philadelphia region. That was down from a total of nearly 500,000, she said.

Officials reported six deaths in North Carolina, four in Virginia, five in Pennsylvania, three each in New York and Vermont, two each in Connecticut and New Jersey and one each in Maryland and Florida.

The U.S. government has estimated that the cost from wind damage alone will exceed $1 billion. Analysts put the total anticipated cost of Irene much higher.

“The impacts of this storm will be felt for some time, and the recovery effort will last for weeks or longer,” Obama said Sunday evening from Washington.