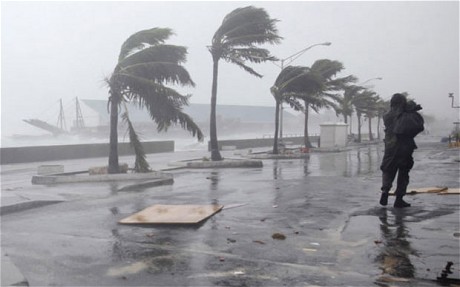 The full force of Hurricane Irene lashing the eastern parts of the US has resulted in 3 deaths in North and South Carolina. A man died in Nashville, North Carolina after a tree branch fell on him, another is dead in a vehicle crash in Pitt County and a third died in Onslow County after he had a heart attack while boarding up his house in preparation for the storm.

Winds of 170kph and rainfall totals of almost 200mm have hammered exposed coasts of the Carolinas with a reported storm surge of between 3-4 metres.

A tornado has also hit coastal North Carolina and damaging mobile homes, outbuildings and trees.Power outages are widespread as a result of the fierce winds.

New Yorkers are bracing themselves for the brunt of this Category 1 hurricane with the subway now closed and numerous bridges also being closed in the city.Overnight tonight the hurricane is set to be at its strongest for the Big Apple and some mandatory evacuations have taken place in low lying areas of Long Island.

The duration of this hurricane is longer than usual due to the size of the storm which is approximately 900km wide and also due to the slow nature of its trek.Irene is travelling at nearly 22kph.

WeatherWatch.co.nz will have updates throughout the day and night as Hurricane Irene continues to unleash its fury over eastern areas of the US.