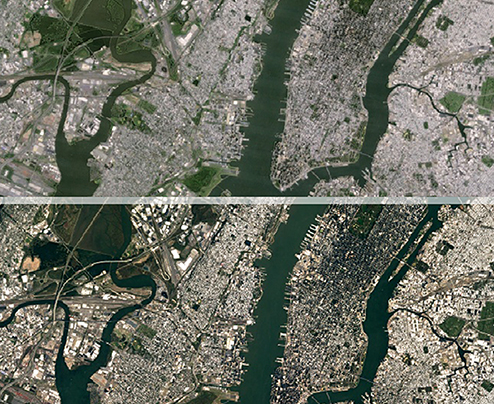 The mapping service is now using images from a newer NASA satellite to produce crisper and clearer pictures.
Google (GOOGL, Tech30) says the higher quality images are possible because of sensors in Landsat 8, a satellite that launched in 2013, and “new processing techniques.”

Landsat 8 can take pictures with a lot more detail, a lot more frequently, Google said in a blog post Monday. That means Google has access to twice as many images that are much more recent.

Google then pieces together the best ones to formulate its maps.

The extra details mean that users can see more subtleties in landscapes, and become more aware of changes over time.

In the past, Google used images from Landsat 7 only.
But a hardware failure affected the images it produced, leading to missing data that appeared as diagonal white space on maps for some regions.

Scientists working with Google are using some of this data to also predict future events, such as an outbreak of cholera due to plankton blooms and a type of fever in animals due to increased vegetation then rainfall.

Google Earth launched about a decade ago, and in addition to giving people a space-eye view of earth, it gives developers free 3D software.