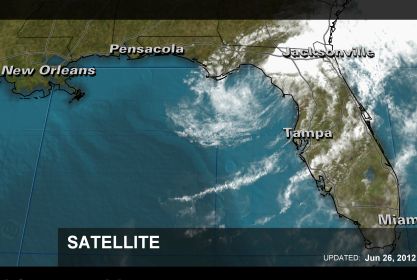 Crystal Pesek got a text from her sister Tuesday morning, asking how the work on her kitchen cabinets was going.

That’s because her Sopchoppy, Florida, home, which she and her husband have spent hours painstakingly renovating, was underwater.

“It’s on pilings,” Larry Pesek said. “The water’s never been that high before, that goes without saying. It’s just heartbreaking because we’ve put so much time and effort into the house.”

Hundreds of Florida homeowners were in the same situation Tuesday as Tropical Storm Debby continued to wreak widespread havoc across Florida. The slow-moving storm has killed one person, dumped nearly 600mm of rain in some areas and triggered flooding resulting in evacuations, rescues and road and interstate closures.

And Debby isn’t finished — forecasters warned the storm could bring another 200mm of rain to the northern part of the state as it slogs through, headed from the Gulf of Mexico to the Atlantic Ocean. Isolated areas could see a total of 635mm of rain from Debby.

Authorities in Pasco County issued a mandatory evacuation order Tuesday for some 2,000 homes along the Cotee River because of flooding.

A house in Lecanto, Florida, is partially destroyed after a tornado associated with Tropical Storm Debby passed through over the weekend. The slow-moving Debby has buffeted parts of Florida with driving rains and high winds as it hovered off the Gulf of Mexico.

Voluntary evacuations were also issued for locations in several other counties — Clay, Suwannee, Wakulla and Taylor, according to emergency officials and CNN affiliates. Shelters were open in numerous locations for residents across the state.

Otherwise, residents were warned to stay home and off the roads. Footage from several areas showed boaters and kayakers navigating flooded roads.

In some spots, the water was receding, county officials said, but was still rising in other areas as rainwater drained into river systems.

“It’s astonishing. I’ve never seen anything like this,” Blackmar said Tuesday. “Our soil is sandy, so it handles water well, but not this much rain.”

In Columbia County, west of Jacksonville, authorities were preparing for the Suwannee River to rise 7 metres in one day.

The river was 17 metres at White Springs, Florida, on Monday, said Harvey Campbell, spokesman for Columbia County emergency operations. On Tuesday, the prediction is for the river to rise past flood stage — 23 metres..

“We have significant flooding problems,” Campbell said. “I have people who don’t remember in their lifetime the kind of rain we had overnight.”

Most of those living along the river have flat boats and “don’t want to be rescued,” he said. Snakes, he noted, are “on the move.”

President Barack Obama called Florida Gov. Rick Scott Tuesday “to ensure the state had no unmet needs as the governor and his team continue to respond to extreme weather and flooding,” the White House said.