Updated 7:25pm — A narrow band of thunderstorms and torrential rain is moving slowly up the lower North Island and has brought some problems to Wellington already.

Widespread power cuts have been reported across the lower North Island as the intense thunderstorms move through.

As of 7:20pm the main cell was moving into Wairarapa over the Rimutaka Ranges.  Watch for flash flooding and slips if in the area.  The main area of activity currently lies between Upper Hutt and Masterton and is slowly moving from west to east ,within the entire band which is slowly moving northwards.

We reccommend people stay indoors once they hear thunder. Motorists should avoid driving in thunderstorms due to the risk of slips and flash flooding this evening in the lower North Island. 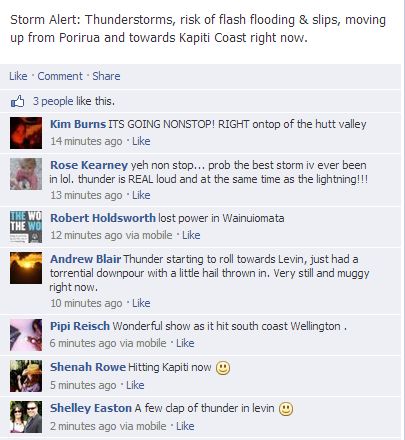 6:27pm update — A sudden early evening thunderstorm has caused manholes to pop their covers, roads to turn into rivers, pets (and some people!) to be frightened and some airline passengers delayed.

The dramatic downpours and thunderstorms are being experienced across the city in many suburbs.

(image to the right / screenshot from our Facebook page)

On Twitter photos of streets and foothpaths flooding as gutters, drains and storm water ways are overwhelmed by the extremely highly rainfall rate.

Some passengers tweeted that they were delayed on the tarmac at Wellington airport while the storms passed over.

The storms may affect Kapiti and South Wairarapa this evening.  Those along the western coastline of the North Island may be exposed to isolated thunderstorms over the next 36 hours.

In Wellington thunderstorms should ease this evening.

A1+++ coverage by WeatherWatch. Good stuff as ever.

Thanks very much Chris, we really appreciate your kind feedback 🙂