A front moves off the top of the South Island on Tuesday morning then pushes northwards over the North Island for the rest of the day, expect strong northwesterly winds to precede the front. The flow is a little more westerly over the South Island, changing southwest about Southland / Otago and then Canterbury as the day moves along.

Chance of a shower for the upper North Island then rain develops around midday, possibly heavy then easing during the evening. Breezy northwesterly winds.

Areas of rain about the lower western North Island, heavy in the morning then easing during the afternoon to the odd shower by evening. Strong to gale northwesterlies about coastal areas in the morning then gradually easing from afternoon. Cloudy along the east coast with spits of rain spreading from the west at times, gusty strong northwesterly winds ease later in the evening.

Dry with high cloud and some sun for Canterbury, late afternoon or evening a southerly change pushes through bringing a few showers, some may be heavy with thunderstorms nearer the coast Banks Peninsula southwards.

Showers for the West Coast, some may be heavy at times then clearing later in the evening. Northwesterlies. Dry at first about Southland and Otago with some sun then early afternoon a southwest change brings rain, possibly heavy for a time then clearing in the evening / overnight. There may be a thunderstorm as this change moves through. 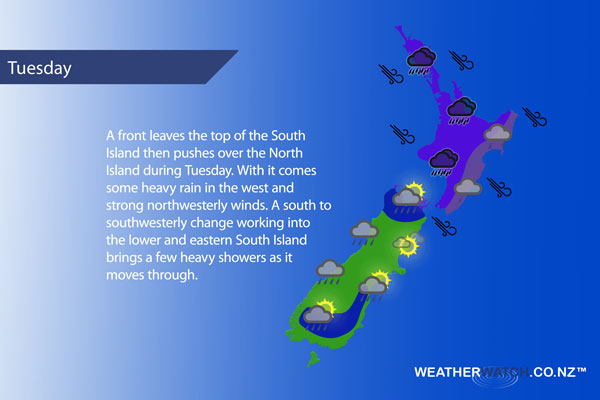