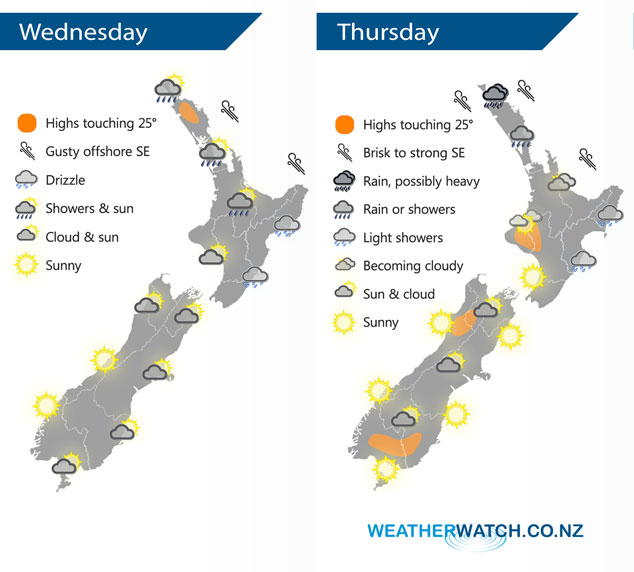 Expect a mainly settled day for the South Island today, some cloud in the south, east and north then breaking to some sun this afternoon. For the North Island it’s cloudy in the east with the odd light shower or drizzle patch, drier out west. From afternoon a small trough brings a few showers anywhere north of about Taranaki then clearing later in the evening. Southeasterly winds will be gusty offshore for northeastern parts of the North Island during the day.

A mainly sunny day for the South Island on Thursday, some cloud builds about inland hills / ranges in the afternoon bringing the low risk of an isolated shower by evening. Light winds and afternoon sea breezes. East to southeasterly winds for the North Island, strong about the far north and offshore to the northeast. Cloudy in the east with the odd light shower or drizzle patch, sunnier out west with high cloud gradually developing. Showers turning to rain about Northland in the afternoon, the odd heavy fall possible by evening. Showers or areas of rain moving into Auckland, Waikato and the Bay Of Plenty overnight.