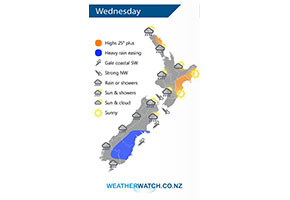 A few showers for western parts of the North Island on Wednesday, more likely Taranaki southwards but a few are possible further north mainly in the afternoon. Any morning cloud clears the Bay Of Plenty then mostly sunny.

Rain or showers for most South Island regions, heavy rain Banks Peninsula southwards eases in the morning, not easing about parts of Otago till late afternoon / evening. Expect gale southwesterly winds for the coastal parts of the eastern South Island, severe gales possible out on Banks Peninsula. These winds will gradually ease during the day.

Strong northwesterlies through Cook Strait ease in the afternoon then winds change southerly. 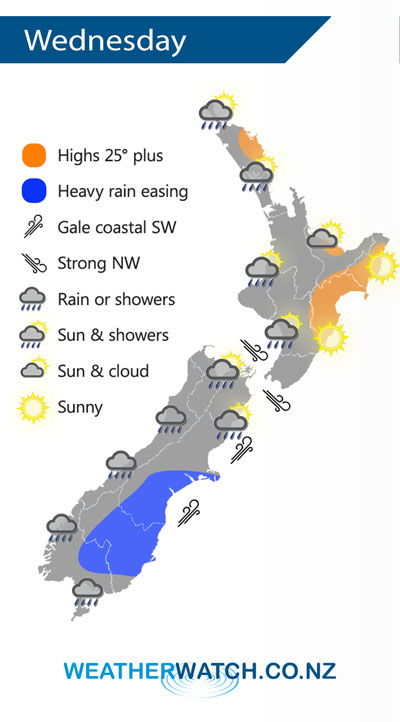 Does the Low look positioned west of Taranaki at 5pm?
Further North, further North than forcast?

Hi there yes it has moved a little further north – but the centre is also expanding wider. Still may make landfall in the NW South Island but until it properly shows up on rain radar a little hard to be precise. Likely to happen in the next 1 to 3 hours at this stage (a little earlier than originally expected). That’s the best thinking as of 6pm anyway!