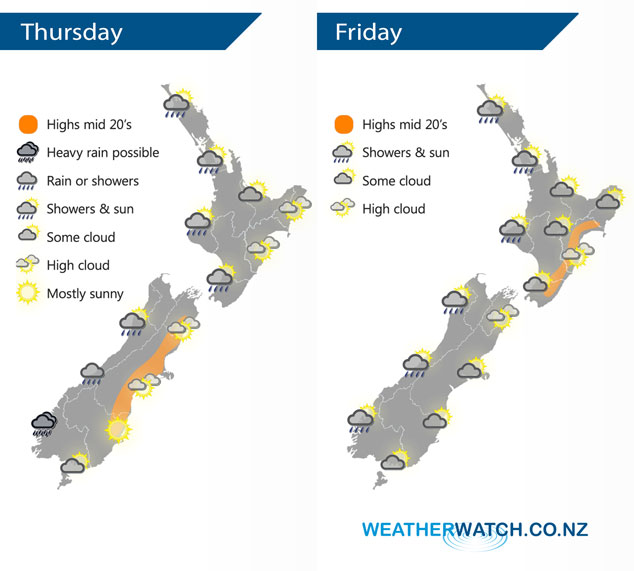 A west to southwesterly airflow lies over New Zealand today. A few fronts slide northwards over the country bringing some rain or showers in the west, dry weather out east. Southwesterlies over the country on Friday ease later on as a ridge moves in from the Tasman Sea.

A few showers for the western North Island today, dry out east with some cloud. Rain for Fiordland with a chance of heavy falls then weakening and moving into North Westland by evening. Mostly sunny for the eastern South Island with some high cloud, the odd shower may move into Southland from afternoon.

Showers for the western North Island again on Friday, mainly dry out east to start however southerlies bring the odd shower to the east coast from afternoon reaching Hawkes Bay / Gisborne by evening. Morning showers clear the West Coast of the South Island then sunny areas increase. Cloud areas about coastal Otago may bring a morning shower then drying out from afternoon, Central Otago is mostly sunny after some morning cloud. Canterbury see southerlies freshen in the morning bringing some cloud and the odd shower then drying out from afternoon although a shower or two may linger till evening.