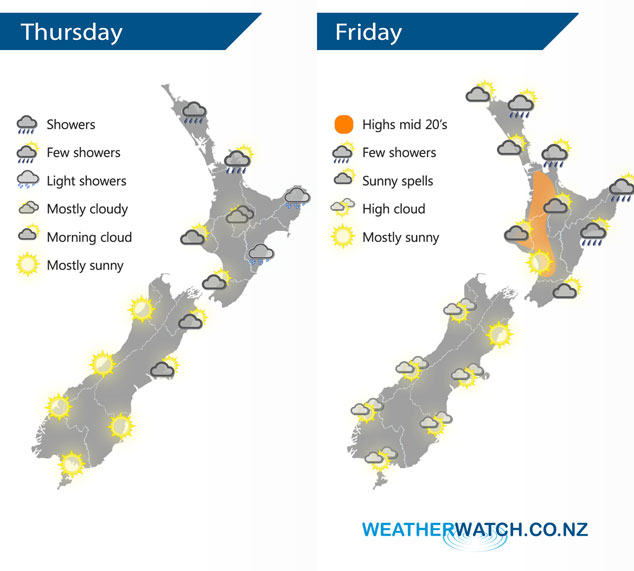 Expect a southeasterly airflow for the North Island today, high pressure further south. A large anticyclone is centered to the east of New Zealand on Friday with an easterly quarter airflow moving around this high flowing over both Islands.

Mostly cloudy today for Northland and Coromandel Peninsula with a few showers, any morning showers clear Auckland but remaining mostly cloudy. Waikato and Bay Of Plenty have a mostly cloudy day, some afternoon sun may break through. Cloudy for the east coast with drizzle or a few showers for Hawkes Bay / Gisborne. Morning cloud breaks in the southwest to a mostly sunny afternoon. The South Island has a mostly sunny day, some morning cloud in the northeast breaks away.

Mostly sunny for the upper / western North Island on Friday, some cloud about Coromandel, Great Barrier Island and eastern Northland may bring a shower or two. Cloudy for the east coast with some drizzle or the odd shower. The South Island is mostly sunny, some morning cloud about Marlborough clears away. High cloud moves into the lower South Island from afternoon.