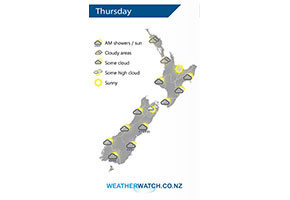 An anticyclone spreads out over New Zealand on Thursday however just before it does a front races northwards over the South Island in the morning. This front will weaken as it moves northwards, moving onto the lower North Island around midday.

Mostly cloudy for the upper North Island on Thursday, there may be a light shower in the morning then areas of sun breaking through from mid or late afternoon. The Bay Of Plenty has a mostly sunny day. Cloud about Taranaki southwards in the west breaks to sun in the afternoon as southeasterlies develop. A mostly sunny morning from Wellington through to Gisborne, southerlies pick up about Wellington late morning quickly moving into Gisborne early afternoon bringing some cloud.

Morning cloud for the West Coast of the South Island with the chance of a light shower, sun breaks through from afternoon. Morning high cloud for Nelson and Marlborough then mostly sunny with onshore winds. Canterbury sees a few morning showers then sun breaks through from afternoon, southerlies tend northeast by evening. Early showers clear about Southland and Otago then becoming mostly sunny in the afternoon with easing southwesterly winds. 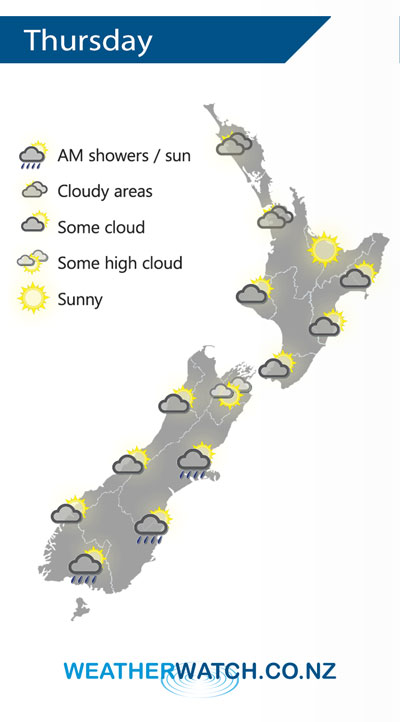