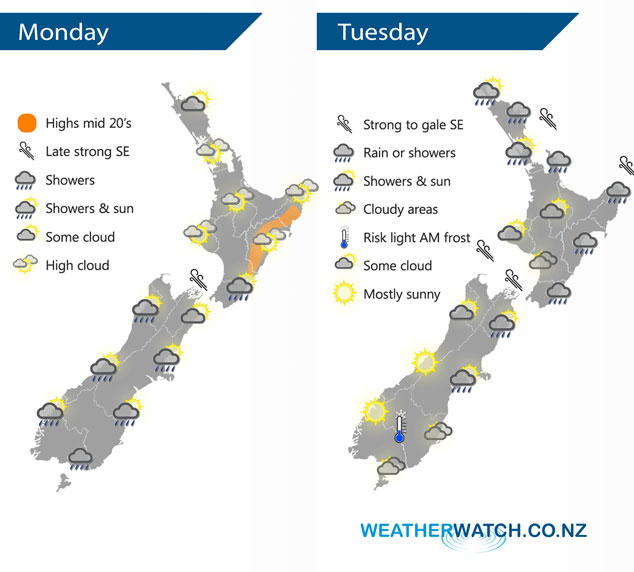 A deep low lies to the north of New Zealand today meanwhile expect a ridge of high pressure over the country. This ridge gives way to a southerly airflow over the South Island during this afternoon then the North Island overnight. A south to southeasterly airflow lies over New Zealand on Tuesday, wedged between a deep low to our northeast and a large high in the Tasman Sea.

Plenty of high cloud for the North Island today, showers will move into northern Northland late afternoon or evening. In the evening cloud thickens up in the east bringing showers or drizzle. Morning showers for the West Coast of the South Island clear then becoming mostly sunny, showers or drizzle pushes north along the east coast with a south to southwest change.

A deep low to the northeast of the North Island brings strong southeasterly winds to some coastal parts, winds may gust to gale in the areas indicated below. Rain or showers for the upper North Island ease during the day, mostly clearing by evening. Rain or showers for much of the day along the east coast, dry in the southwest but expect some cloud. The South Islands West Coast is mainly sunny, some morning cloud about Nelson and Buller clears. Cloudy areas in the east, some morning drizzle for Canterbury clears away. There could be a light frost about some central parts of the lower South Island to start the day.