Showers clear for most of the western North Island this morning then sunny areas increase with southeasterly winds, the odd shower may hang about Northland through till evening. Early rain along the east coast eases to showers then long dry spells developing from afternoon, winds cool from the south. Mostly cloudy for the West Coast of the South Island, chance of a light shower or two especially about Buller. Cloudy areas and occasional sun elsewhere, chance of an isolated shower late afternoon / evening about inland Otago.

Thickening cloud for much of the western North Island on Saturday, rain moves in during the afternoon with heavy falls possible about the Waikato through to northern Taranaki / Central North Island for a time then easing overnight. The east coast is mainly dry then some rain moves in mid to late afternoon, easing overnight. A mostly cloudy day for the West Coast of the South Island, chance of a shower or two mainly in the morning, some rain moves into Fiordland around midday. High cloud for Nelson and Marlborough, chance spot of rain in the afternoon / evening otherwise mainly dry. Elsewhere in the east morning cloud breaks to mostly sunny weather, a few showers affect Southland from afternoon and an isolated shower or two may make their way into Otago late afternoon / evening. 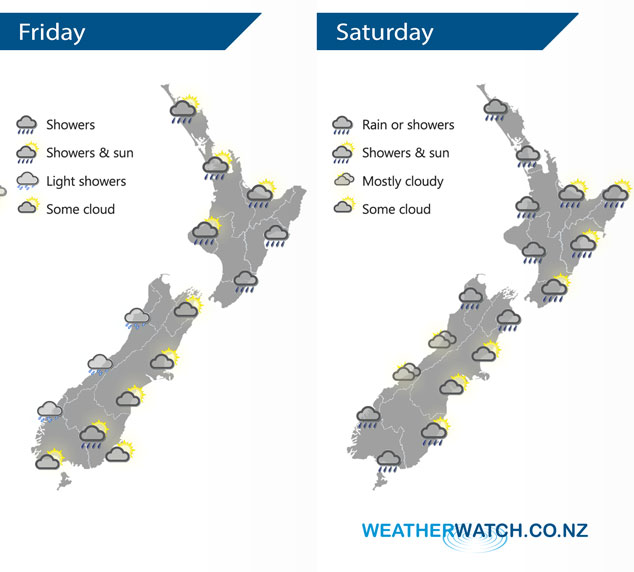