A broad but weak low pressure system lies over New Zealand today, a front associated with this low gradually moves from west to east over the North Island during the day. A large high is centred off to the southeast of the South Island on Saturday directing in an easterly quarter airflow over the country. Within this airflow is an occluded front which affects some eastern parts of both islands.

Rain eases for most of the western North Island this morning to the odd shower, some sun may break through also. Rain about the Bay Of Plenty eases from afternoon, sun may not make an appearance till later in the day. Some rain for the Wairarapa spreads into Hawkes Bay during the morning then into Gisborne early afternoon. Mainly dry for the South Island with a chance of morning fog for some inland areas, especially Canterbury. The odd shower about also.

Mostly sunny for the western North Island on Saturday after any morning cloud or fog breaks away, winds light from the southerly quarter. Northland could see a shower or two at times during the day, mainly in the west. Rain for the east coast with the odd heavy fall possible, especially about Gisborne. Sunny for the South Island’s West Coast, areas of cloud in the east may bring a shower or two. Rain moves into Marlborough during the afternoon then Canterbury later in the evening. 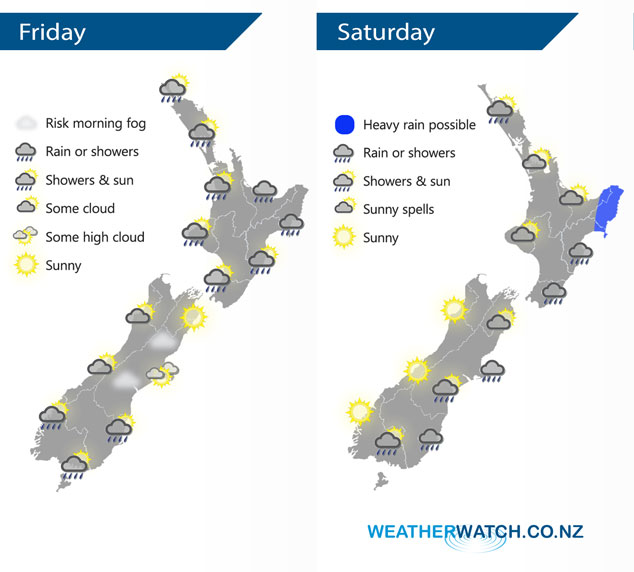