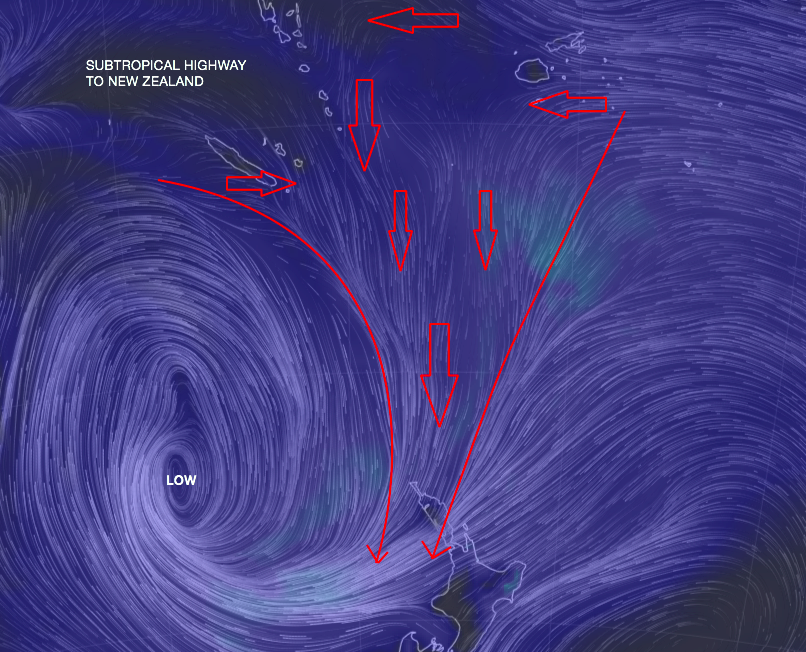 The sub-tropics have arrived in the Upper North Island. This tropical transition is triggering very heavy downpours in northern parts of the country.

As of dawn rain was clearing Northland and should clear Auckland early to mid morning – but not before a burst of downpours heavy enough to cause more flooding.

Overnight Auckland was hit by significant downpours, the most intense on Friday evening with roads flooding and power cut.

Torrential downpours are igniting as the airflow from areas between Fiji and New Caledonia and the Coral Sea start to funnel southwards over the top of the North Island. It even looks like a funnel with the moisture being fed from the NW, N and NE of the country and down into a line of torrential rain and isolated thunderstorms over the upper North Island.

The rain is spreading across the North Island and into the South Island this morning.

WeatherWatch.co.nz is warning flooding and slips are “highly likely” again in various parts of northern New Zealand over the next 24 to 36 hours, mostly north of Lake Taupo. (Check our rain maps and hourly forecasts for more info – also MetService for warnings and rain radar). Please note, as with earlier this week we may find it’s fairly hit and miss as to where the worst weather will be – it can flare up quickly and linger for a long time and the risk zone generally covers northern New Zealand.

Rain will also push south tonight and into Saturday as far south as Canterbury.

There have been a few thunderstorms but so far it’s been fairly quiet on the thunder front – however if sunny spells form in Northland and Auckland this afternoon then there is a greater chance of afternoon thunderstorms forming. View the lightning tracker here or on our free app.

Humidity levels have been 99% in Auckland overnight.

The humidity eases on Sunday in the north and further still on Monday.

During this storm expected to see a lot of Phil – he’s my “go to” for weather – but no where to be seen… hope all is ok Phil – you haven’t jumped ship?

Hey there – I’m still here! I wrote that story actually. My videos are on hold as we’ve moved on from the NZ Herald due to their ongoing cost-cutting and so we are in the process of building our own studio in Auckland at Bauer Digital and hope to re-launch our new weather videos either late next week or some time this month (just ironing out the bugs).  A lot of change happening behind the scenes as most of the media continues to cut costs so we’re working with new organisations to ensure we can keep things humming into the new digital future (and invest into more products and free services!)

Cheers – and many thanks for the interest 🙂
Cheers
Phil D